Hustle and Scrooge - My Financial Strategy for 2021 (part 1) 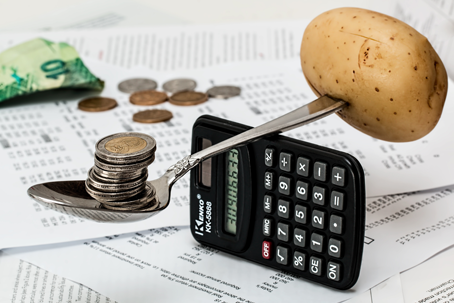 By proper job I mean a salaried job with holiday pay, and sick pay, and all those other lovely benefits of being employed by an employer.

Instead I chose to take the freelance, self-employed, be your own boss, come and go as you please, work when you want approach to earning my living.

For the most part, with a few ups and downs, that has worked out well.

I've built up a good number of regular clients that meant I have always had several projects on the go that brought in an adequate flow of money.

My income status would I guess be termed 'comfortably off' - not wealthy, not poor, but always enough to provide for the family's needs.

Then the virus came...

I've worked from home for many years, and I've always been a bit of a prepper, so I should have been well set.

But there was a chink in my armour that I hadn't spotted.

I work in the web. I do all sorts of web stuff. And I have built a bit of a niche specialism in a couple of sectors...

So as the impact of the pandemic became more apparent back last March and April I got a stream of polite (and sometimes a little panicky) calls and emails from clients... "Really sorry, got to put the project hold", "Tightening our belts", "We can continue but won't be able to pay for at least six months".

As an all round prepper I should have had savings stashed away for just such an occurrence. But (and there always is one) I had been using all my spare cash over the past couple of years to pay off an historic debt.

But I was just too late, and now the hard rains were going to fall.

I had to re-engineer my financial strategy fast and furiously.

Unfortunately because of how my 'business' was set up I fell through the cracks and was not eligible for any of the various government grants, loans or furlough payments being offered as 'virus aid'.

This was not the first time in my life when the purse strings had tightened so I knew the routine...

So I began to hustle.

I looked in every nook and cranny, turned over every stone, dug out every old contact, took whatever was going, at whatever rate was being offered.

Alongside that we started to look at everything we spent.

We changed our eating habits - out with the convenience meals, processed foods and little treats, in with the cooking from scratch and home made cakes.

Soups and jacket pototoes are nutritious, healthy and cheap. And I've rather grown to like them.

We cut our own hair, make our own clothes, burn our own wood and grown our own veg.

Subscriptions were cut, we got rid of one of our phones, and SORNed our older car to save on the tax, insurance and MOT costs.

2020 was tough, but with hustle and frugality as our watch words we began to get the ship back on course.

We've managed to diversify our income sources to bring us back up to about where we were before.

And we have managed to cut our expenditure by at least a third.

So all in all we have ended up in a better place with a bit more spare monthly income than we had at the start of the year.

Now we have to make sure we use that extra money wisely and put it to work.

That is what I will cover in Part 2 of My Financial Strategy for 2021.