Tony Stark aka Elon Musk is a serial entrepreneur, who likes to push technology beyond its limits. In 2004, Elon Musk invested in Tesla Motors and he took over as chief executive in 2008. Both SpaceX and Tesla both almost went bankrupt in 2008. Elon had $40 MM left to his name and split the $40 MM to continue funding SpaceX and Tesla.

This past Summer Tesla was worth more than Ford, GM and Chrysler combined, Tesla’s valuation was the 10th largest US stock by market value and Elon Musk became the seventh-richest person in the world, surpassing Warren Buffett at the time.

On December 21st, Tesla became a part of the S&P 500. Tesla now has a market cap above $600 billion. Elon’s worth is more than Starbucks and Wells Fargo and worth more than Morocco and Urkaine.

The past three weeks, I have witnessed Tesla's stock go up 11 straight days. The stock now trades above $800 and has a market value of $834 billion and in the process made Elon the richest person in the world.

Tesla and SpaceX CEO Elon Musk became the world's richest person Thursday, and his reaction is about what one might expect from someone who gained a few billion dollars in wealth on top of his 12-figure net worth.

Musk claims to have ambitious plans for spending his extraordinary wealth. On Thursday, he changed the pinned post on his Twitter profile to a 2018 tweet promising to dedicate his money to problems on Earth and to establishing a colony on Mars. 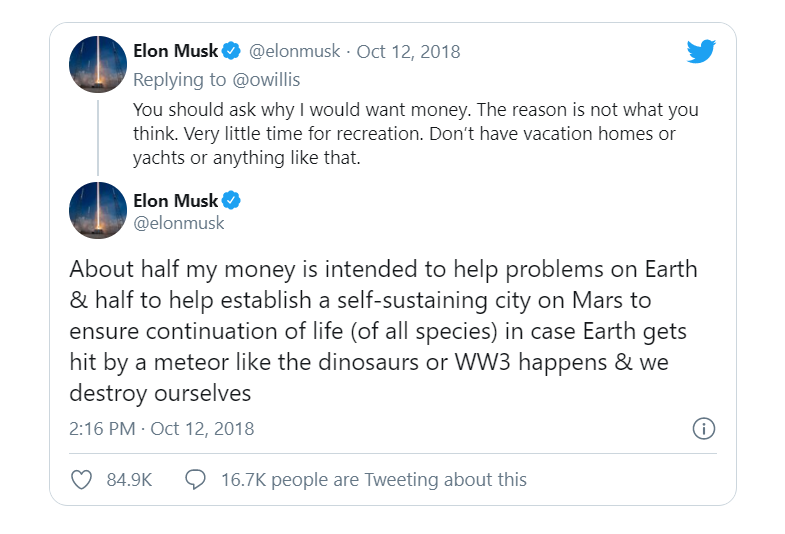 At this point, there is only one person that I know that can catch Elon and his name happens to be Chamath Palihapitiya. Stay tuned for that post.