It's a bubble and a blip on the future 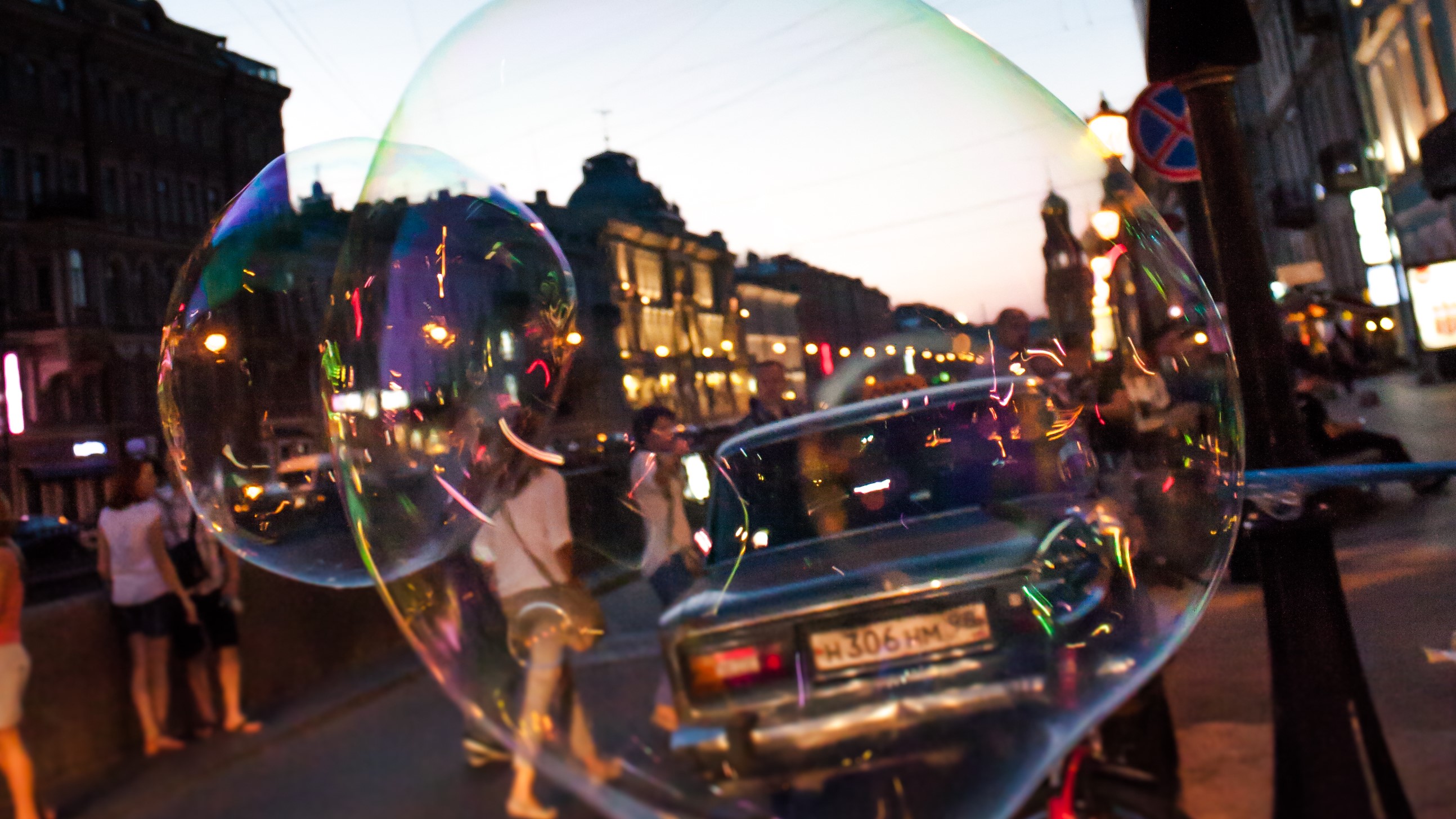 The other day, I got into the DeFi pool, by staking some stable coin to earn some other random token called AUTO on autofarm.network and last night, I got more debaucherous by staking some BNB and CAKE as a liquidity provider on PancakeSwap into some farming pool. I have to be honest with you, I don't really know what I am doing, but I am a "learn by doing" kind of person in general, so perhaps this might be a good way to get up to speed or become a very expensive lesson.

In my limited experience participating in this, it seems to be ticking along, and I think since I am using a stable coin in one of them to mine a token, the risk of impermanent loss is lower or non existent - meaning the risk of failure is limited to a contract hack. Though, I might be mistaken on that - I am learning...

Over lunch yesterday, a colleague "grilled me" over various topics, which he later apologized for as he felt he came across as too demanding - I laughed, as in my opinion, we barely scratched the surface and we could have talked for days and I still would have had more thoughts to add.

One of the questions was on whether Bitcoin and crypto in general is a bubble. My answer was an emphatic - yes and no! As you can see, I like to be helpful, but I don't like to commit. Well, that actually isn't the case at all. Whether it is a bubble depends on your perspective of what that actually means.

An economic bubble or asset bubble is a situation in which asset prices appear to be based on implausible or inconsistent views about the future. It could also be described as trade in an asset at a price or price range that strongly exceeds the asset's intrinsic value. Wikipedia

Is Bitcoin a big bubble?
(not as good)

However, if we look at the dotcom bubble of which it is often compared, was that truly a bubble either? Yes, it is obvious that back at the end of the nineties, investors were buying the equivalent of bags of overvalued shitcoins, but value has to be assessed over time and, based on the state of the current industry conditions. What I mean by this is, we have to look longer than the short timeframe of economic rise and collapse and consider what kind of value is generated post-collapse that might not have been generated otherwise.

An economic bubble or asset bubble is a situation in which asset prices appear to be based on implausible or inconsistent views about the future.

The estimated total investor losses in the dotcom bubble were around 5 trillion dollars (which is about 5 months of corona virus relief spending by the US last year) but at that time, a lot of the future wasn't predicted, it wasn't plausible. For example, today Amazon, one of the companies that did make it through that bubble, is alone worth 1.7 trillion dollars, and if you consider the value of the various supply chains their ecosystem facilitates, that evaluation would be much, much higher. And there are other dotcom companies that have done well too, but not just them. Apple has been around awhile, as had Microsoft - they have benefited from what was born from that bubble too.

But it isn't just the unicorns, because out of the ashes of that dotcom bubble, an industry was matured and developed to create far more value than was lost in the crash, an industry that might not have come about at all, if there hadn't have been that investment drive into outlandish future possibility.

I like some others, see crypto as a bubble in the sense that all of this current hype around it is largely going into projects that do not have a usable or scalable product in any way, but, as more interest builds and investors come in, the value will start pooling around projects that do hold usecase, that do offer something of value back to the market, rather than vaporware, that generates positive market attention and then disappears into the ether.

I think this is needed, I think that being bitten and becoming twice shy is part of the maturing process required of an industry so that investors start demanding proof of value. What this means is that projects are going to have to "grow up" and start taking responsibility on the delivery of workable solutions, or risk having investors abandon shop. Currently, investors are immature too, abandoning working projects for ones that offer a higher potential yield, even though it is generating a disconnect between value and reality or plausible reality, a bubble.

But, I predict that while most projects will indeed die, a few projects will survive and go on to become the future Amazons and Googles of the world, with the key difference being that they are decentralized and far more distributive of their value than what came out of the dotcom era. These successful projects will be part of building the infrastructure and direction of other industries to come, in the same way the tech giant success kicked-off a lot of the startup development and companies that we use daily now.

As I see it and you can heavily disagree, a bubble value has to be compared to what is generated post-bubble, the value of the phoenixes rising form the ashes. While there will be short-term losses spread amongst the investors, the industry as a whole can become far more valuable over time as in the early days, a lot of the leaflitter is burned away to give space for deeper roots and seeds to fall and sprout into new trees. When it comes to crypto, we are only just starting the exploration into possibility and already there are usecases being applied and used with increasing interest for implementation and integration from existing business.

The future value of the crypto and blockchain industry is immense, as it can be applied to pretty much everything that was developed post-dotcom bubble as well as into areas of the economy that haven't changed much for a hundred years or more. On top of this, the application in these areas will produce a raft of innovative solutions, creating new industries, new jobs and new possibilities. This investment phase isn't for everyone of course, although since the barriers to entry are so low in comparison, many more people can opt-in and take part at a level they can afford, from all over the world.

I see that Hive has a massive amount of survival potential as while there are going to be ups and down, the people of Hive underpin the usecase of it, keeping it alive through thick and thin. While individuals come and go, the community as a whole keeps ticking along and developing and using new activities. Investing into Hive isn't investing into a single project, it is investing into a community of project creators and enablers. Eventually, some of these second-layer solutions are going to get a lot of traction and the rest of the community will be here to support them when they do. The time for Hive is arriving, especially since some of the juggernauts from the dotcom bubble are declining. 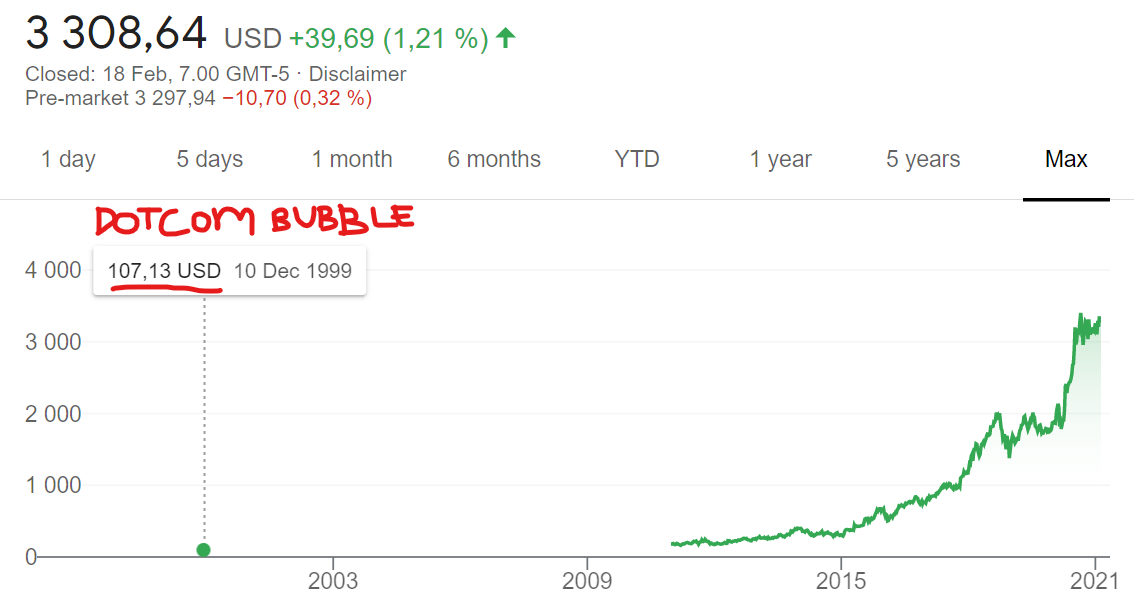 At the end of the day, I think that any bubble at the start of an industry becomes a blip on the chart against future value. What is considered overpriced in the past, becomes a bargain in the future. At the height of the dotcom bubble, Amazon stock price hit a peak of about $107 a share, before crashing down over 90% to around 7 dollars. That is a pretty big loss if you bought at the top. Today, Amazon is trading at 3300 dollars. That dotcom bubble premium paid, doesn't seem like a bad investment now.

Twenty years from now, we will see if today's crypto marketcap was a bubble, or just the energy needed to create an the new economy.