Today's silver showcase from my collection is a Kennedy half dollar from 1964.

These beautiful coins were released as a memorial quickly after Kennedy's assassination, but due to their high silver content (90%) they were heavily hoarded by stackers and as a result, mints from 1965 and later had only 40% silver. Can't blame them! Beautiful coin, a great president and high silver content! 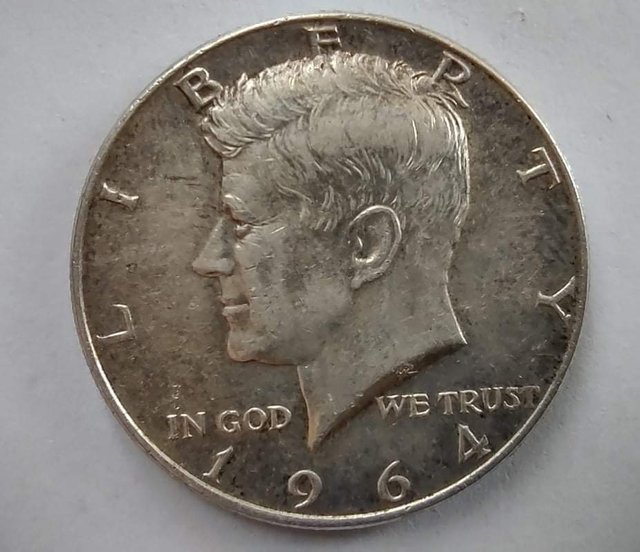 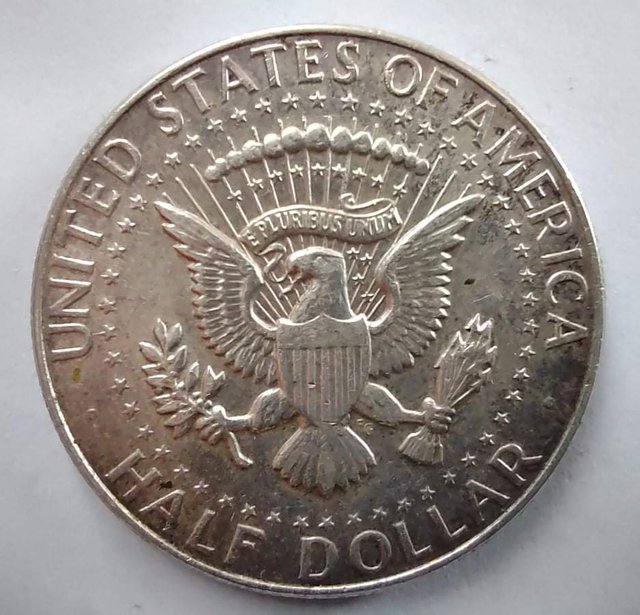 The back side features a modified presidential seal of the United States of America:

A shield (with vertical stripes) on the chest of an American eagle. The eagle holds an olive branch on its right talon and a bundle of thirteen arrows on its left, and in its beak a scroll with "E PLURIBUS UNUM". A circle of stars surrounds the eagle source

Size comparison with a meh euro: 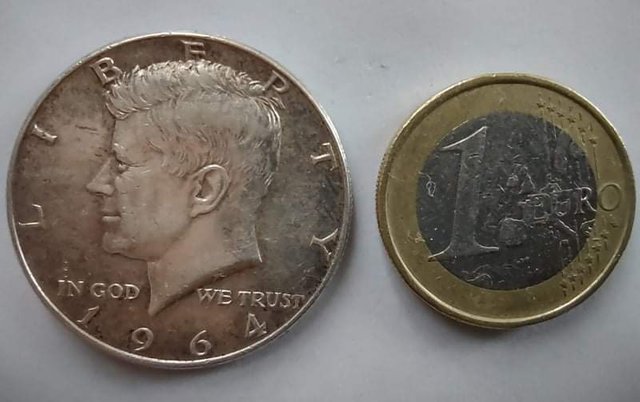 And a war nickel I recently acquired: 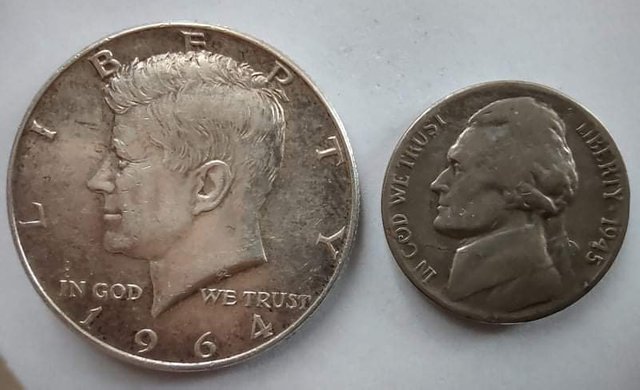 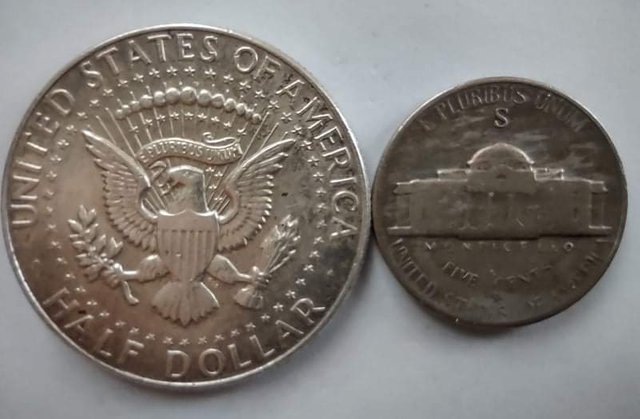 I love the JFKs.
I stack those!

Awww... don't be! You're doing very well!
In time you will know what it is that you will stack,
and focus on buying that every time you find the opportunity.
Stack on, @trumpman
!LUV

Because they were in production for only one year and were hoarded, there is a large number of high grade coins on the market. You can often find nice looking coins at junk silver prices.

Hey @yintercept, here is a little bit of BEER from @trumpman for you. Enjoy it!

Truly in God we trust

This is real silver content coin. It such amazing coin in history name after Kenedy

That’s a good one! Thanks for the back story

The liberty coin is nice. These are great coins worth stacking !


I have an Elton John joke.
It's a little bit funny.
Credit: reddit
@trumpman, I sent you an $LOLZ on behalf of @olympicdragon
Use the !LOL or !LOLZ command to share a joke and an $LOLZ.
Delegate Hive Tokens to Farm $LOLZ and earn 110% Rewards. Learn more.
(1/1)
0

When is you next shill me your shitcoin contest? :3

I have a roll of these from my grandfather. A few are really nice and shiny. I love to look at them. I remember getting a few in circulation when I was a kid.

Did the Ben Franklin half dollars also have 90% silver? How about the IKE dollars? I have a few of those somewhere that a bank gave me in the 90s when I asked for unusual coins.

Franklin half dollars are all 90% silver, most Ike dollars have no silver, save for a few. You can see them here, look for "silver clad"
https://www.usacoinbook.com/coins/dollars/eisenhower/

Thanks for the info!

Thanks for chipping in!

Thanks for doing these posts. Like I said, I used to collect coins and so the urge is still in me. I don't really think I'm in a position to get back into the hobby now, but I am enjoying watching it from afar through you

My grandfather always gave me silver dollars but pure silver. This was in the 70s and he would say they don't make these anymore but I did not understand the value. Though only completing school until the age of 10 he understood silver & gold while excelling in math and accounting.

Those magnificent silver coins cannot be compared to modern ones. It is an insult lol. Totally beautiful.

Fun fact they worth more than the actual value.
You are in a roll with coin.
It is interest to denote even the penny is worth more to make
long term.
Keep sharing the pics. it shows how immense the market is for coins.

Nice looking coin though, I'll certainly give them that.

So this was just a regular coin for circulation that you can technically still use as legal tender if you wanted to?

I believe so, yes!

Incredible piece I have one but much more damaged, although it was a gift and the sentimental value it has makes it more valuable, thanks for showing it to us
!PIZZA
!LOLZ
!BEER
!HIVE
Posted Using LeoFinance Beta

@romulos, sorry! You need more to stake more $PIZZA to use this command.

I wish I had a few of these. These half dollars are quite nice.

Oh yes! I wish I had more too!

finally a coin that I have in my collection :)

Clickbait! That's a whole coin, not a half...

I was scammed. Someone call the police.

@funnel, sorry! You need more to stake more $PIZZA to use this command.

Early in my Stacking I remember finding a War nickel in my change by sheer luck, it was in a pile of change in a jar I kept and I usually set aside the US Coins into another when I came around to sorting them out.

The wear on Kennedy's face adds to the portrait of him - gives him a wearied quality. I like it! Absolutely, 12 grams is a nice weight in the hand.