Thou Shalt Not Underestimate The Airdrop! Already Over $19,000 Made Without Even Investing!

I only had few thousand dollars of net worth to invest into cryptocurrency as a highschool dropout living with his parents. I have been through the trenches of cryptocurrency investments and it has been quite a journey of learning and growth. It's not necessarily the fun type you'd hear in motivational speeches.

There were many times trades didn't go well. I have lost money and I have experienced how tiny differences in where price change its direction can nearly wipe out an account in margins trading instead of raking in massive profits.

I have tried all sorts of investing. I can say that I am at least doing a decent job at all of them. Here are few things I have done well:

All these mentioned and unmentioned little methods have slowly helped me have a better portfolio over time and I have come to learn many things and come across many great friends in the process. I'm happy and grateful for all of them.

But I have to talk about the big elephant in the investing room. I have multiplied my initial investment several times based on airdrops alone! Just think about the beauty of it all. I came to crypto late to the party in 2017 despite hearing about it while Bitcoin was around $1000 (BTC trading was not easily accessible to me at the time). Then I work hard to learn and grow. I invest, stake and HODL.

Then I Have This Fallen On Me

If you look at my post history around the time @steemhunt released, you will see my claims that HUNT Token is an easy 10 cent coin. I have expressed that I am willing to even HODL upto $1. It is all on the blockchain. There was an Initial Exchange Offering at 2.5 cents per HUNT. I did not participate in this. I delegated for the project and even offered some insights. I couldn't find my old article (due to searching the blockchain being incredibly difficult); but after my writing of it came the "Shuffle" button (which also started giving HUNT Tokens as rewards).

I was making all these Tokens for myself without spending a penny of my own funds. I decided to HODL strong and look where it has come: 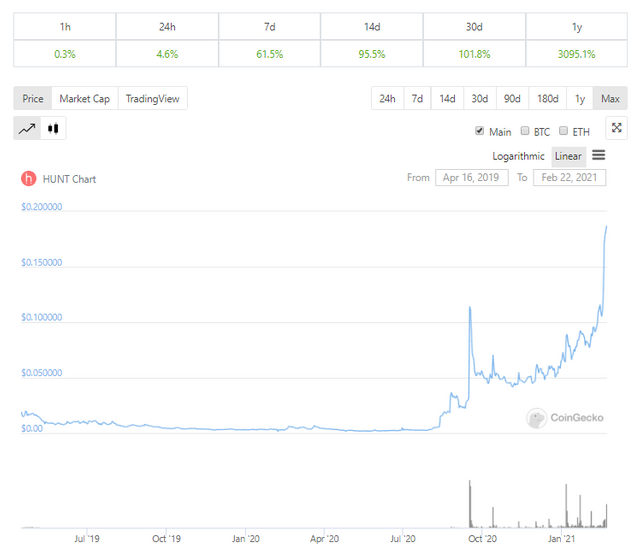 When we came across the bear market and had everything falling apart, it was @splinterlands NFT that became the best performing asset for me. HUNT Token took that crown in 2020 and it is still going strong. There is over $60 million in trading volume alone! 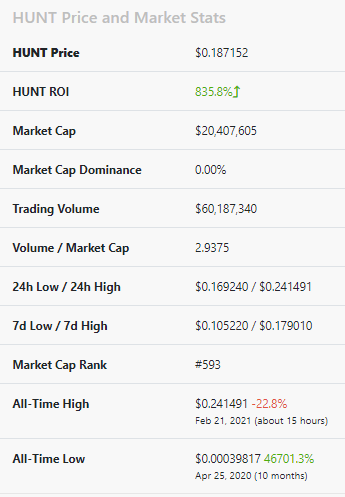 Compare That With STEEM Trading Volume

Hunt is doing almost 60% of STEEM volume. STEEM has very low ROI compared to HUNT. Those who HODLed HUNT did so much better over the last year. There were millions of HUNT Tokens airdropped.

Speaking of millions, did you forget that HIVE was an airdrop?

Trading volume is only 1/3 of Hunt Token. But I won't worry about that. @dan himself has lauded the level of decentralization of HIVE and there are many amazing DAPPs already running on HIVE. One of these include world's #1 blockchain game. Another one of them is the greatest decentralized microblogging platform the world has seen yet; @dbuzz

Below is a quick view of my account wallet: 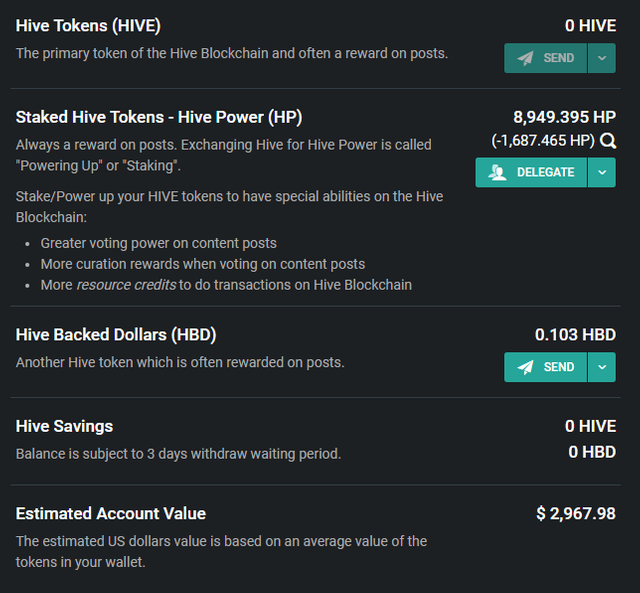 Most of that was an airdrop. I didn't sell a single bit of it. Same goes for most of my other SCOT Tribe Tokens. LEO was obviously my favorite from the inception. The idea was such a no brainer and the trading history of @khaleelkazi mentioned on his blog impressed me. He has so far delivered above my expectations. 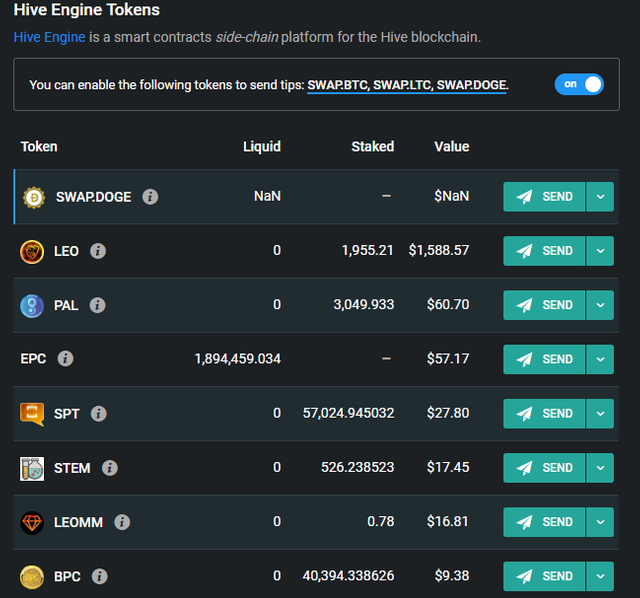 About half of the value presented above came from those beautiful airdrops. The best part is that some of these airdrops have their own airdrops. That's not too common. But these projects achieved so much success, they are now givig birth to whole new projects such as __________ of @leofinance

There will also be a Governance Token airdrop for stakeholders of LEO (LEO Power, Miners, Liquidity Providers). @threespeak is another project that has the potential to go after LBRY. I have already seen content creators on YouTube who were not into cryptocurrency or privacy or government conspiracies mention https://odysee.com which is powered by LBRY. These are the Alexa Rankings for now:

Other than this and THETA, I can't think of competitors to @threespeak on top of my head. This is good news. @threespeak is still early. If you HODL HIVE, you will be receiving airdrops to participate in some complex tokenomics.

BLURT doesn't get enough love IMO. They are trying something different and you need to at least congratulate them for that. @jacobgadikian has been a phenomenal human being and I have many great interactions with witnesses of BLURT. They are good people with good brains inside their heads.

Hang around https://blurt.world or https://blurtter.com or any other front end and witness the community for yourself. It is a very small community. But the quality of content is great. In fact I encourage every reader to take your best written articles from STEEM, HIVE, Publish0x, Medium or any other place and post them on BLURT. There could be some nice rewards coming from active curation efforts.

You can keep yourself hyped for some additional airdrops on top of your BLURT airdrop as well.

It happened after receiving some payouts recently. It is the first time I have crossed this number in the 3 social media blockchains I have been using. This should demonstrate that it is much easier to earn on BLURT.

BLURT is not available on many exchanges. Not many people know about it. Who knows where it could end up eventually. BLURT could be the next big performer even for a brief time. It's dirt cheap at them moment. A small investment can go a long way. At least make sure to HODL the stake that was airdropped to you. 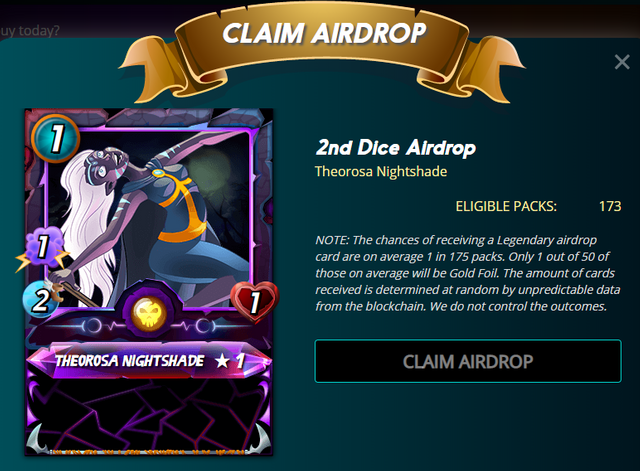 I did not get any cards from this airdrop. I should have bought 2 more Azmaré Dice packs. Even though I missed these, I have had Legendary Cards, Epic Cards and many other airdropped to me on @splinterlands Even the Totems I have received can be treated as an airdrop from participating in Land Presale.

The above mentioned were the biggest airdrops I still HODL. I did some impressive trades with BCH airdrop betting everything on the price of BCH which tripled my portfolio in under 48 hours. I have seen serious movements and billions getting made and lost in these markets.

Among them, airdrops have a special place. They are like blessings that bless you more if you believe in them and keep them with your for longer