After making my last major article, I have been on bit of a rabbit hole when it comes to Wikipedia. I was already aware about the issues with Wikipedia. It was before I started learning about blockchain I started leaning about how easily Wikipedia could be manipulated. The source of it was my love for science, innovation, aliens, ancient technologies and whatever that is being suppressed from the masses. As a teenager I learned how easy it is for the mainstream voices to simply come up with a bunch of articles linking to each other to shape what Wikipedia page regarding some great genius like Nikola Tesla is going to look like.

The Power of Astroturfing

It was a new term for me to learn. It certain wasn't a new phenomenon though. If you have looked into any suppression of data whether it is political conspiracy (WMD hoax or any other regimen toppling work), questioning vaccine safety or medical industrial complex, COIVD-19 scaremongering and suppression of treatments that actually worked, government studies on UFOs or high profile assassination and even general image of encryption, cryptocurrency and privacy technology; you have encountered and have had to counter Astroturfing.

Astroturfing is the practice of masking the sponsors of a message or organization (e.g., political, advertising, religious or public relations) to make it appear as though it originates from and is supported by grassroots participants. It is a practice intended to give the statements or organizations credibility by withholding information about the source's financial connection. The term astroturfing is derived from AstroTurf, a brand of synthetic carpeting designed to resemble natural grass, as a play on the word "grassroots". The implication behind the use of the term is that instead of a "true" or "natural" grassroots effort behind the activity in question, there is a "fake" or "artificial" appearance of support.

Sharyl Attkisson is one of the few real journalists we have left today. She ahs been working in the business since 90s working for several companies. She resigned from CBS News on on March 10, 2014. How CBS (didn't) cover certain issues such as 2012 Benghazi attack in proper detail was part of the reason. She has her own TV show; Full Measure with Sharyl Attkisson.

Under The Hood of Wikipedia

Most people are completely unaware of how things happen on these not so transparent community maintained encyclopedias. The above video has not even reached 10K views on YouTube. The people involved are very good with their technology. If you are not obsessive about protecting your privacy, they will track you, doxx you and may even threaten your employers to fire you from the job. These are not speculations. All of these things have happened. Whether worse things have happened or not is the real question.

Don't just look at the title because that was not even the worst. Watch the video and you will see many cases that will make you feel great about not bothering with news channels.

“We are working on detecting and deranking those kinds of sites – it’s basically RT and Sputnik,” Schmidt said. “We are well of aware of it, and we are trying to engineer the systems to prevent that [the content being delivered to wide audiences]. But we don’t want to ban the sites – that’s not how we operate.”

Schmidt said Google was not in favor of censorship, but would rather focus on ranking. “I am very strongly in favor of ranking. It’s what we do,” he stated. “It’s a very legitimate question as to how we rank, A or B, right? And we do the best we can in millions and millions of rankings every day.”
Source: https://www.thelastamericanvagabond.com/googles-eric-schmidt-says-americans-dumb-detect-fake-news-plans-derank-russian-news

Ask yourself about how far you have scrolled down to find what you want in the search results page whether it is Google, Bing, Qwant or DuckDuckGo. Messing with rankings can work almost as well as full blown censorship. The best part is that the world in general is mostly oblivious or less concerned about this.

Why is Wikipedia so useless?
In a recent MIT Technology Review article, “The Decline of Wikipedia,” Tom Simonite documents how the site’s increasingly “labyrinthine,” bureaucratic editing protocols drive away would-be new contributors, leaving the task to an overworked, insular hierarchy less interested in accuracy than in upholding some vague Wikipedian ideal.
It’s chilling because so many people — young journalists especially — look to Wikipedia first. They not only shun print reference sources, they even balk at scouring the Web for information if it entails, God forbid, clicking on more than a single link.
About show business, Wikipedia is chronically wrong, routinely awarding Oscars and Emmys to performers who were merely nominated for them.
It’s unbalanced to the point of defamation about corporate America. The entry for admittedly controversial Monsanto is no balanced history of a Fortune 500 company with 22,000 employees, but an indictment — even including a long section on Monsanto’s supposed role in driving farmers in India to commit suicide.
A matter of interpretation? No, it’s propaganda. And there are no shades of gray when it comes to easily verifiable facts about our home town’s bricks and mortar.
Donald Trump’s entry doesn’t even mention Trump Tower, his flagship property familiar to any viewer of “The Apprentice,” except to say that he “renovated the Trump Tower in New York City.”
It doesn’t say when the alleged renovation took place, what Trump Tower is, where it is, or even that Trump built it. He never “renovated” the mostly condo building, he merely at one point redesigned its shopping atrium.

Integrity of Wikipedia is for Sale

This is one of the basic problems with communism, politics or other initiatives that try too hard to keep money out of the equation. Instead of Utopia, it breeds corruption. When things are corrupt and your competitor is editing the Wikipedia page to make you look bad and the look better, you are going to have to spend top dollar yourself as a defensive measure.

How much are people paid to massage clients’ Wikipedia pages, or to write them from scratch? There’s no set rate. Gigs listed at sites like elance might offer the vague amount of “Less Than $500” for creating a new Wikipedia page for a business. A freelance writer named Mike Wood, who is quoted in multiple stories about editing Wikipedia for cash, told The Atlantic that his clients pay him $400 to $1,000 per article. He also said that many of his clients are big shots:

The site, which is devoid of advertising and free of charge to readers, relies on tens of thousands of volunteer editors to maintain its entries. The number of active editors is falling, down almost 40 percent from 2007, from 51,000 to 31,000, which gives existing editors even more clout over an increasing number of entries on innumerable subjects around the world. Most of them believe in the mission of founder Jimmy Wales, which is to provide unbiased, accurate information.

And then there is Mike Wood. The 37-year-old Wikipedia editor is paid by companies and individuals to create and maintain articles that present them in the best light. Sometimes, he is even asked to remove negative information from a client’s page. Wood likens himself to an attorney in court, advising a client on what course of action they can and cannot take. He charges as little as $50 for a small Wikipedia edit, up to $2,000 for the creation of a new article. Wood says that Wikipedia is his main source of income, and he makes more editing for hire on his site, LegalMorning.com, than from any other work he has pursued.

One firm, calling itself Wiki-PR, claims it has edited or created articles for over 12,000 paying clients. Wikipedia’s Signpost, an online resource written and edited by the site’s editors, discovered a tweet from Wiki-PR VP of Sales Adam Masonbrink that announced high-profile clients like media giant Viacom and travel deal site Priceline.com as clients.

You Can Hire Your Own Wikipedia Specialist at https://www.upwork.com/hire/wikipedia-freelancers

Wikipedia is still nto very happy about creationof new pages. At many times they consider many of the projects and people to be simply not famous enough or worthy enough to be added to the encyclopedia.

So how many of you got IQ Token airdropped to you. Everipedia is basically a fork of Wikipedia with so much added functionality and content. They copy the good stuff from Wikipedia and make tings so much better. They are also a part of EOS ecosystem @dan helped to create.

Does Anyone Know The Reason From January 1st, 2021 Price Spike? 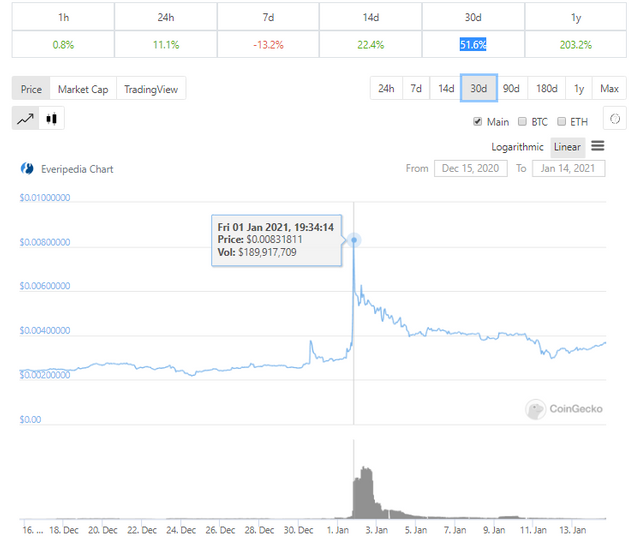 You can check out https://everipedia.org and compare the experience you have with Wikipedia. Everipedia is still a project being worked on. At least with blockchain and real rewards for user contributions has the potential to make Everipedia a far less corrupt place. 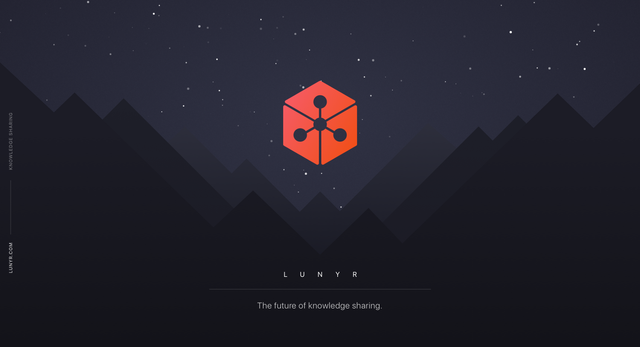 I was a big fan of Lunyr and I have made profit trading Lunyr while it as one of the Top 100 and Top 200 cryptocurrency. This was their Medium blog Now the project ranks at #1491 on @coingecko I posted about both of these projects 3 years ago. You can read my old writing here. I even had the fortune to talk to @devilinlimbo

For The Sake of Truth - Support The Blockchains

Don't even expect the geniuses of older eras to come to your support. Many of them have no idea bout economics or human psychology. They are just great coders and talented at developing technologies.

We have our new generations of builders who are at least aware of the broader world and creating antifragile systems without being blinded by Utopian/Communist ideals that won't be able to make a difference in the world.

"The other blockchain" Hive forked from used to have a Wikipedia-like site hede.io so the obvious question is: Anybody working on a Hive blockchain version of Wikipedia? Hede.io has it's code on GitHub. I am still learning programming so I am not qualified yet to do it myself.

This is such a great idea and I had no idea about this. Let's hope someone will pick this up and make something to educate people about blockchain. https://everipedia.org is already doing well. It's too much work and probably a waste of energy to directly compete with them. Focusing on niche like https://hpluspedia.org did would be the path to take.

there is nothing TO BE EXPECTED from centralization; in which "small chiefs (low i.q. people) will always end up settling at the top".

PERSONALLY i haven't posted anything on centralized FOR YEARS.

Parler is Up! Kind of
#Parler #decentralization

It's my first time learning about https://odysee.com and https://newtube.app
Thank you for sharing!

https://odysee.com is from 'LBRY'
IT IS TO COMPETE with youtube,
'LBRY is more academic', kind of

Thank you for all the information!

Everipedia sounds pretty dubious, copying only the 'good' parts of Wikipedia? Who chooses which parts are good? How do you make something good by copying something bad? I'll check them out, but this wasn't a very good sell, didn't explain anything about how these alternatives would be different.

The main difference is that it is not controlled by a small group with a bad track record when it comes to doxxing and violation people's privacy and lacking integrity in their editing. There is nothing dubious about https://everipedia.org It's bigger and more informative than Wikipedia. Use it for a while and you will look at Wikipedia as fit was something from stone age.

They won't be winning me over just yet... search is slow and clunky, they want me to create an account (huge disadvantage), and they don't even HAVE an article for Wikipedia. I'll keep an eye on it, but so far it just looks like a Wikipedia clone that hasn't had time to make a bad name for itself.