Should you trust HBD? 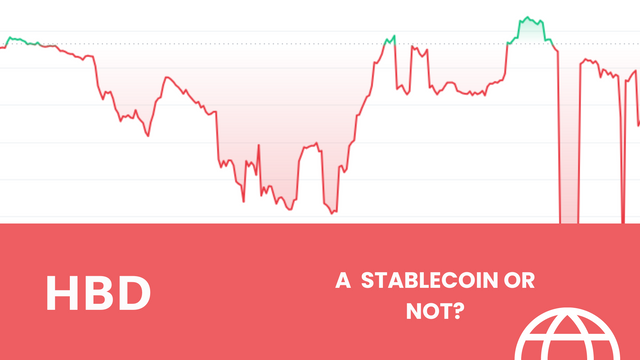 I have been observing HBD lately, and while it has been stable for the most part, the fact is that we are not truly there yet. Within the past few days, HBD has lost almost 5% of its value and most often, hovered back to its stable price. While its ability to come back to normal is commendable, something is off.

Is 5% Fluctuation a Big Deal?

Someone may argue that a 5% shift in value that is at most temporary is not so much of a big deal. But, this argument can be washed off easily when you start to look at the numbers. The higher a person’s HBD store, the higher and more significant the percentage drop. Here are some figures:

Based on the above, you will definitely agree that more stability is desired.

What could be the Issue with HBD?

First, it is important to know that HBD is a crypto-based stablecoin that is backed by Hive the native currency of the Hive blockchain, unlike Fiat-based stablecoins like USDT which are centralized and operated by a central bank.

For HBD to be reasonably stable, a large number of Hive must be reserved in other to achieve a low number of Stable HBD. Thus, if let’s say, 100 Hives are reserved to achieve 50 HBD, the HBD HODL value starts going higher than the design, and Hive reserve is not being compensated to create a balance, the resultant imbalance that has been created will result in volatility.

Mind you, I am just applying a general principle underlying the fundamental nature of crypto-based stablecoins. The basic idea is clear, holding more Hives for a little amount of HBD is to accommodate for swings in Hive which is not intended to be a stable currency, but is backing a stable currency.

So, could it be that there is a higher amount of HBD in circulation that is tilting the Hive reserve-HBD balance/ratio?

This is definitely expected. Normally, most bloggers in claiming their rewards, will power up Hive and withdraw HBD as blogging rewards (converting it to Hive and selling off as Hive), but with the 20% APR in HBD savings along with the pHBD-USDC liquidity pool on the Polygon blockchain, it is only logical to conclude that more and more people on the Hive blockchain are HODLing HBD like never before.

Why SBD needs to be More Stable

The basic idea of a stablecoin is that it is a currency that offers stability in price owing to the fact that it has been backed by a reserve asset, a significant asset reserve. One of their unique features include the fact that they are free from volatility, a status yet to be attained by Hive Backed Dollars (HBD).

Stability is needed for any currency to enjoy public relevance, i.e. become adopted for daily use. Thus, if HBD becomes more stable, it could essentially act as better storage for monetary value on the Hive blockchain, and it will enjoy more adoption, as users will be able to trust it the more.

The fact that we see price drops and increases does not necessarily rule out HBD as a stablecoin. By the traditional definition of what a stablecoin is, it is a coin that is designed to be more stable (not entirely stable), than traditional cryptocurrencies. So, by this definition, HBD is no less stable. But here are reasons why it is reasonable to believe that HBD is no less stable:

HBD has basically succeeded where Basis has failed, despite receiving about 100 million dollars in reserve. So, HBD is by no means or in any slightest way a failure. Hopefully, with the right moves resulting in better reserve to stablecoin balance, HBD will stand taller. But don’t expect HBD to achieve the USDT, USDC or BUSD level of stability, for as long as it remains tied to Hive, it will suffer brief periods of instability.

Congratulations @zestimony! You have completed the following achievement on the Hive blockchain and have been rewarded with new badge(s):

Such a great analysis! That's why HBD needs more stability before being listed on an exchange like Binance (many people wish), until HBD stops falling below 1$ we are not going anywhere.

Your post should be more rewarded, hopefully some whale will read it and vote for it. Sometimes it seems that people don't like criticism :/

Thanks a lot Antonio. HBD truly has some way to go!

Hopefully, with the right moves resulting in better reserve to stablecoin balance HBD will stand taller

Well, from your analysis about HBD, I think I'll have to have a high trust💯

Hahaha!
Thank you for sharing sir..

Interesting analysis, never even thought about the stability of HBD, I guess it's because my eyes have been on hive, but this gave me insight.

Thanks for enjoying every bit of it.

But don’t expect HBD to achieve the USDT, USDC or BUSD level of stability

If you check most StableCoins that are backed by algorithm or other assets aside fiat, you will see same slight instability. We know why the above ones are more stable, it’s because, they are backed by fiat. As for me, during times like this, when there is instability, all I do is wait, after the market becomes stable or rather corrects, the HBD will follow, that’s when I will sell my HBD.

Or you can just convert to Hive with the blockchain, but it will take 3 days. This method might give 99% value in $$$. Not a financial advise, just a suggestion

Thanks for the suggestion!