Hive Frontends Posts Share | Which frontend is the most used?

Time to look at the Hive frontends. I have done this report three months ago, but we have some movements lately and its good time to revisit.

Unlike the traditional media the Hive blockchain has many frontends. Some of them are niche specific, other more general.
What is the usage of each of them? How many posts are posted from the individual frontends? What is the trend? Are some getting more traction than others? 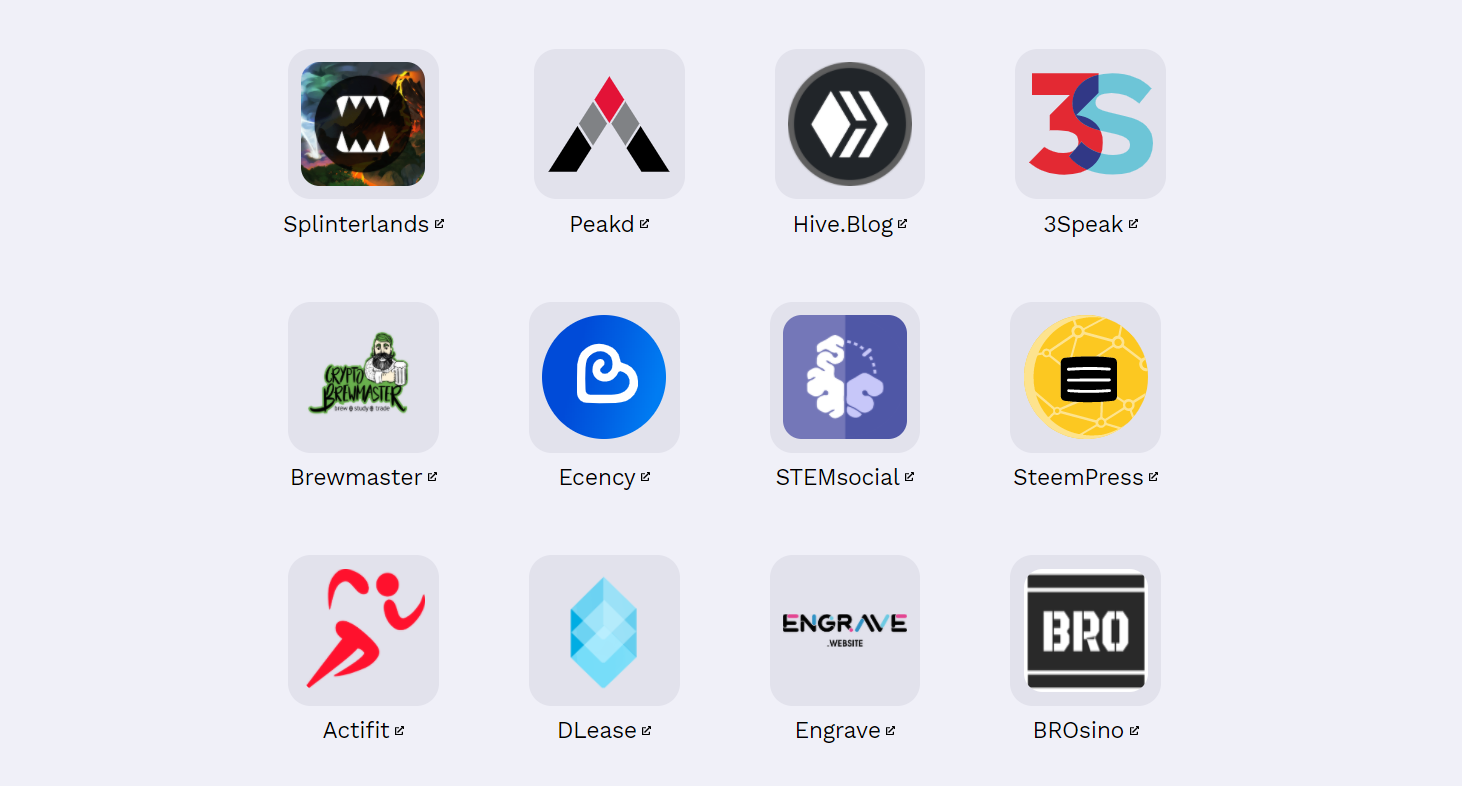 We all know blogging dApps are not the only ones build on Hive. Games are taking advantage of the Hive blockchain and we are already seeing more of them build each day. Splinterlands opened the gate for games on Hive, and now we have many more.

Here we will be looking only into the blogging apps.

The generic Hive frontend. Its open source as well. Here is the chart. 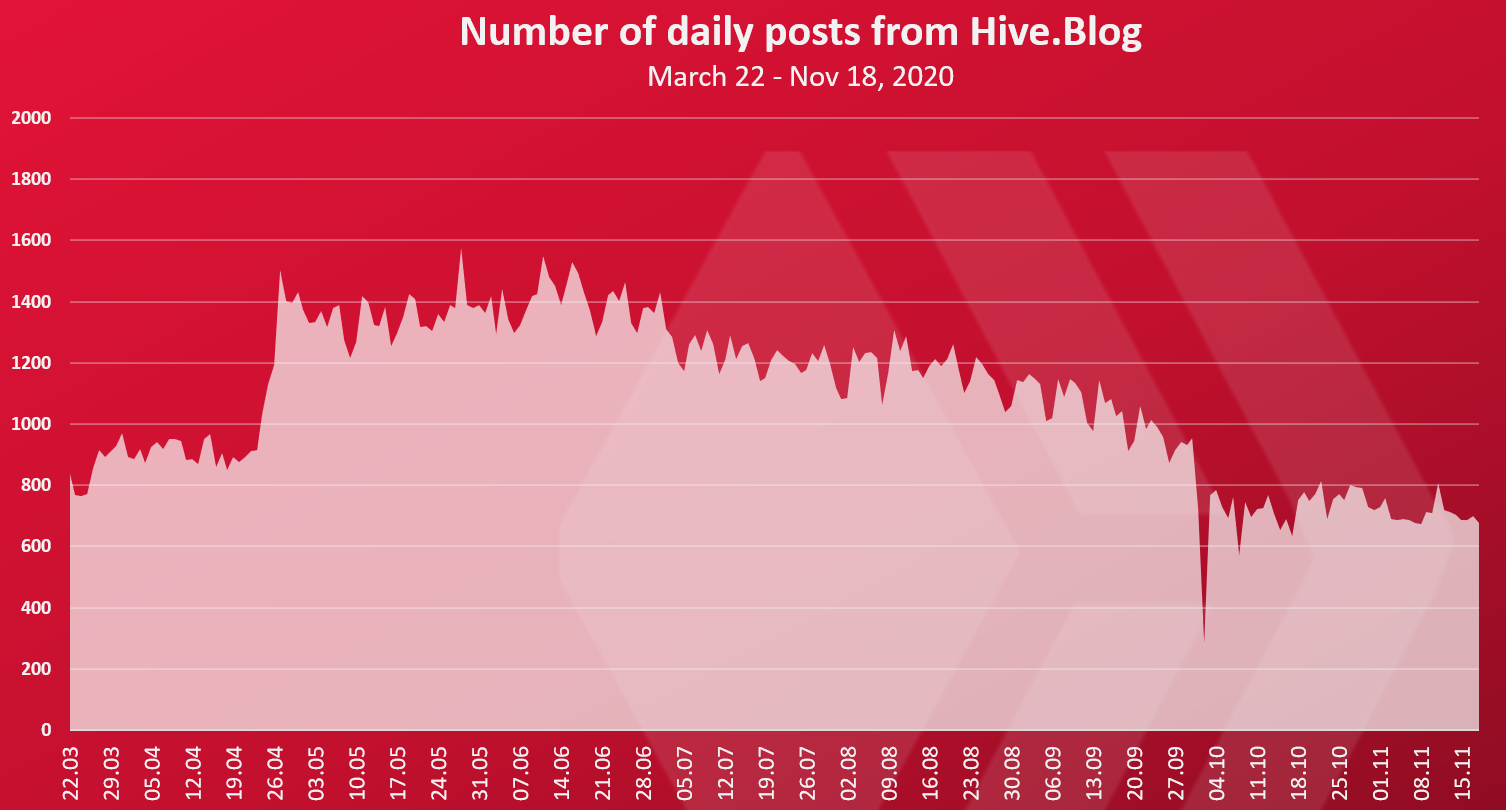 A spike in the number of posts early one when the blockchain was created and when the price went up. At the top there was 1500 posts created per day. In the last period this number is just bellow a 1000.

The chart for Peakd. 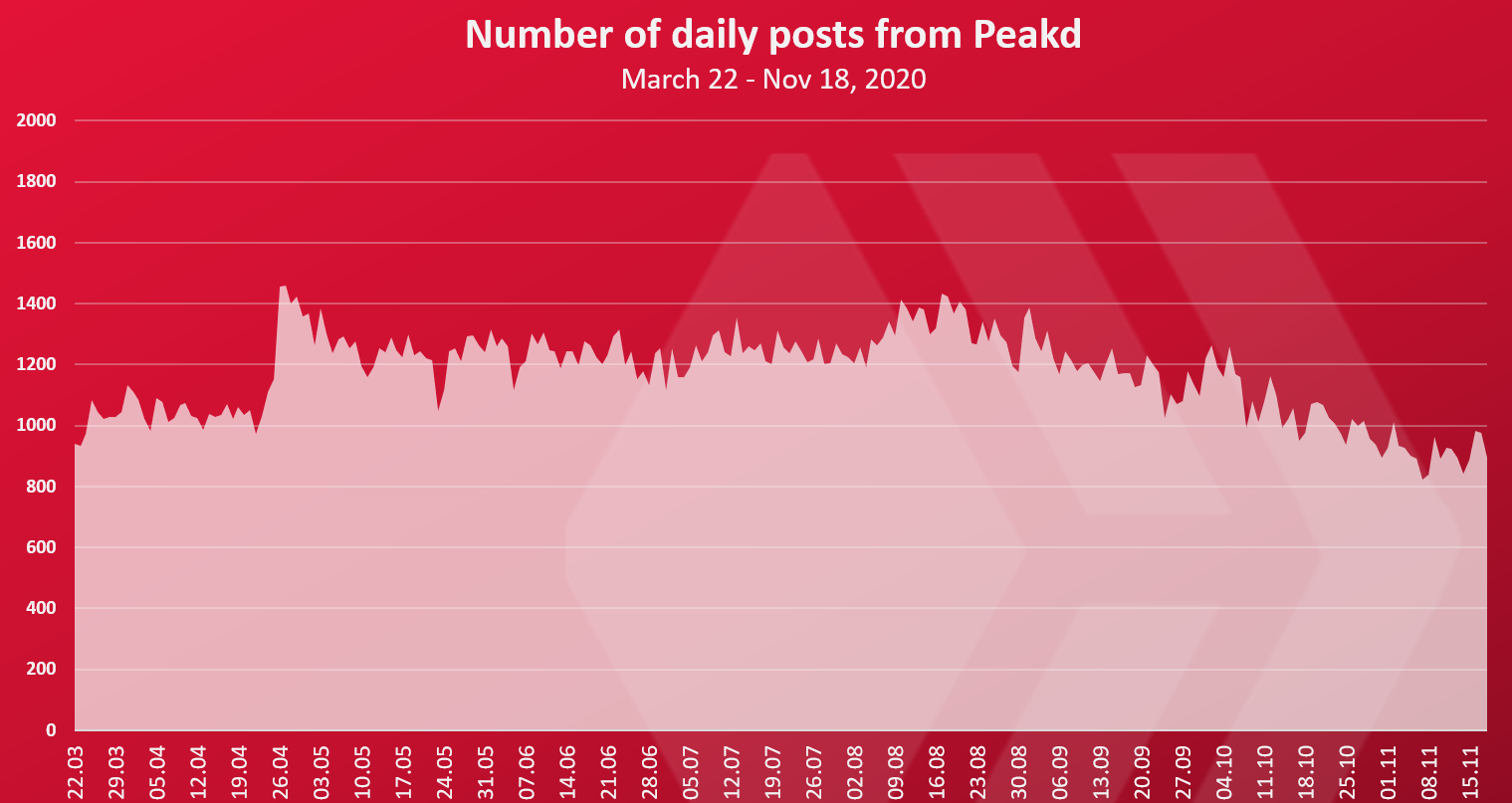 There is a small difference between the chart for Peakd and Hive.Blog. The decline seems to be smaller here, but still we can see a downtrend in the last period. The price has a lot to do with this.

Around a 1000 posts per day from Peakd in the last period.

Number of daily posts from Ecency

Ecency has been around for a long time as well. The old name was esteem. Here is the chart. 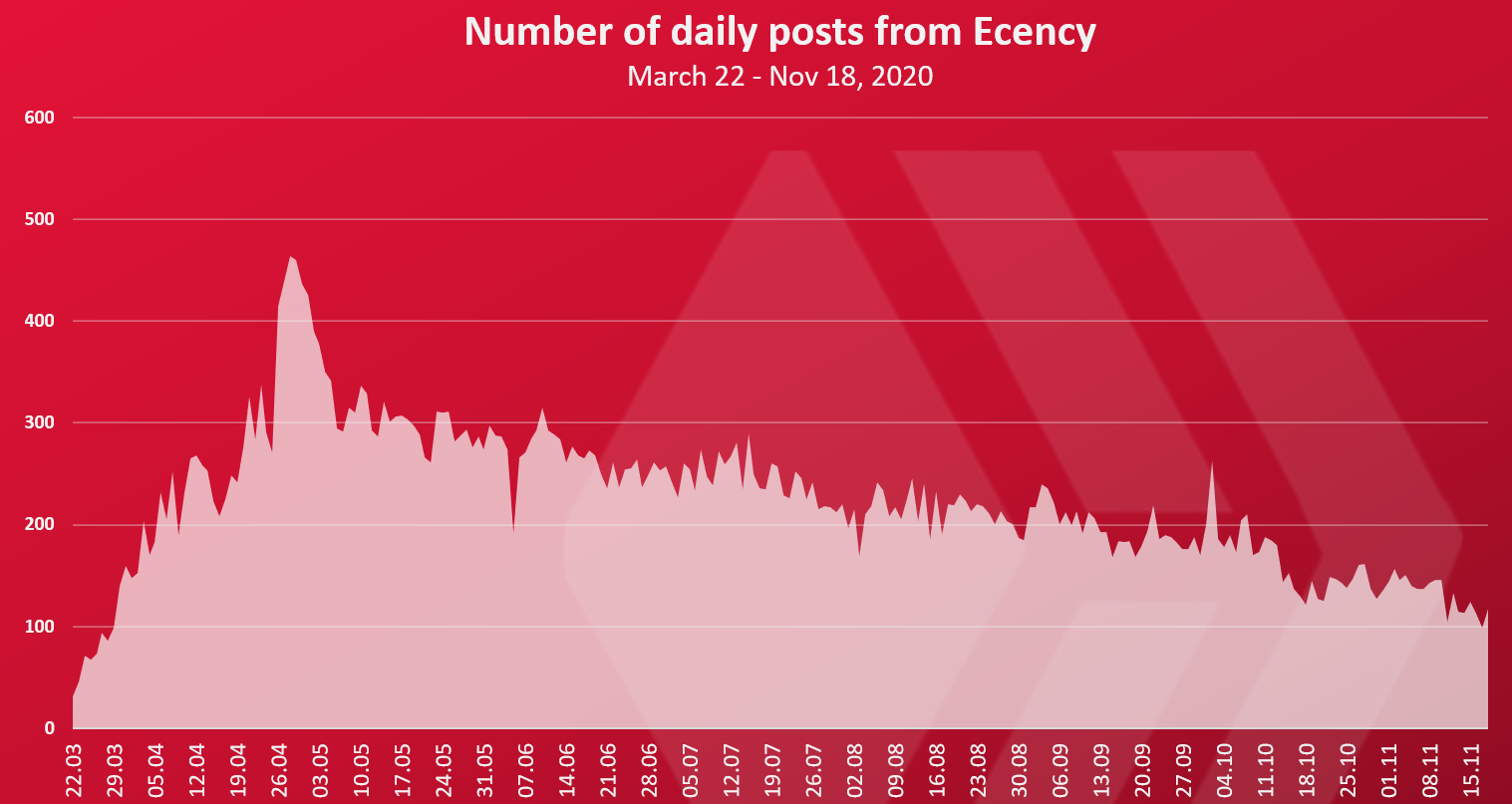 More volatility here even than Hive.Blog. A downtrend in the last period getting to 100 posts per day.

Number of daily posts from 3Speak

The number of posts/videos from the Hive video platform. 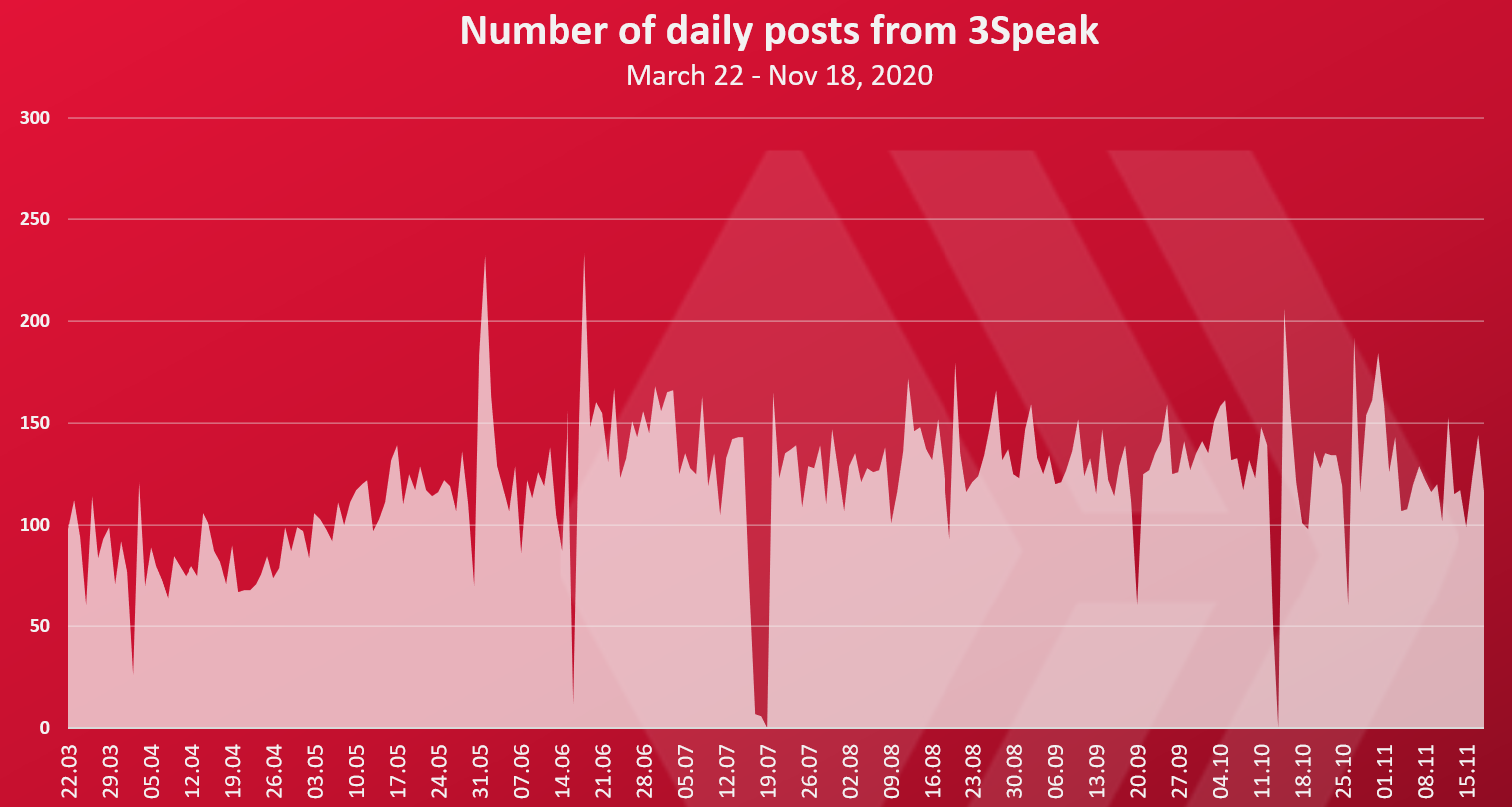 The video platform on Hive, 3Speak. A steadier numbers here in the numbers of uploads. A constant number between 100 and 150 video uploads in the last period.

Number of daily posts from Exxp/Steempress

The chart for the Hive blockchain WordPress plugin. 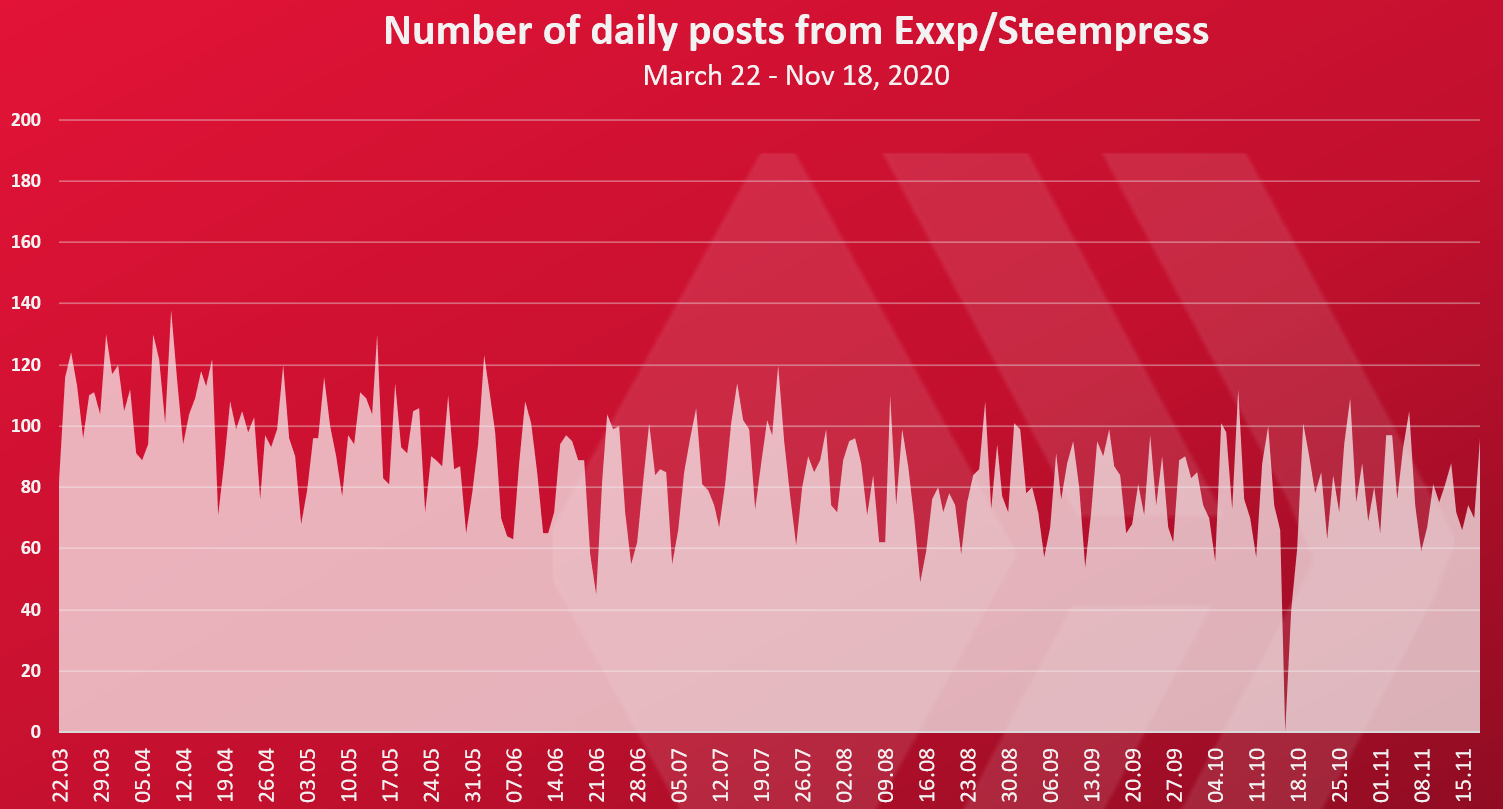 Some up and down numbers here, but overall a small down trend.

Number of daily posts from LeoFinance

The chart for LeoFInance. 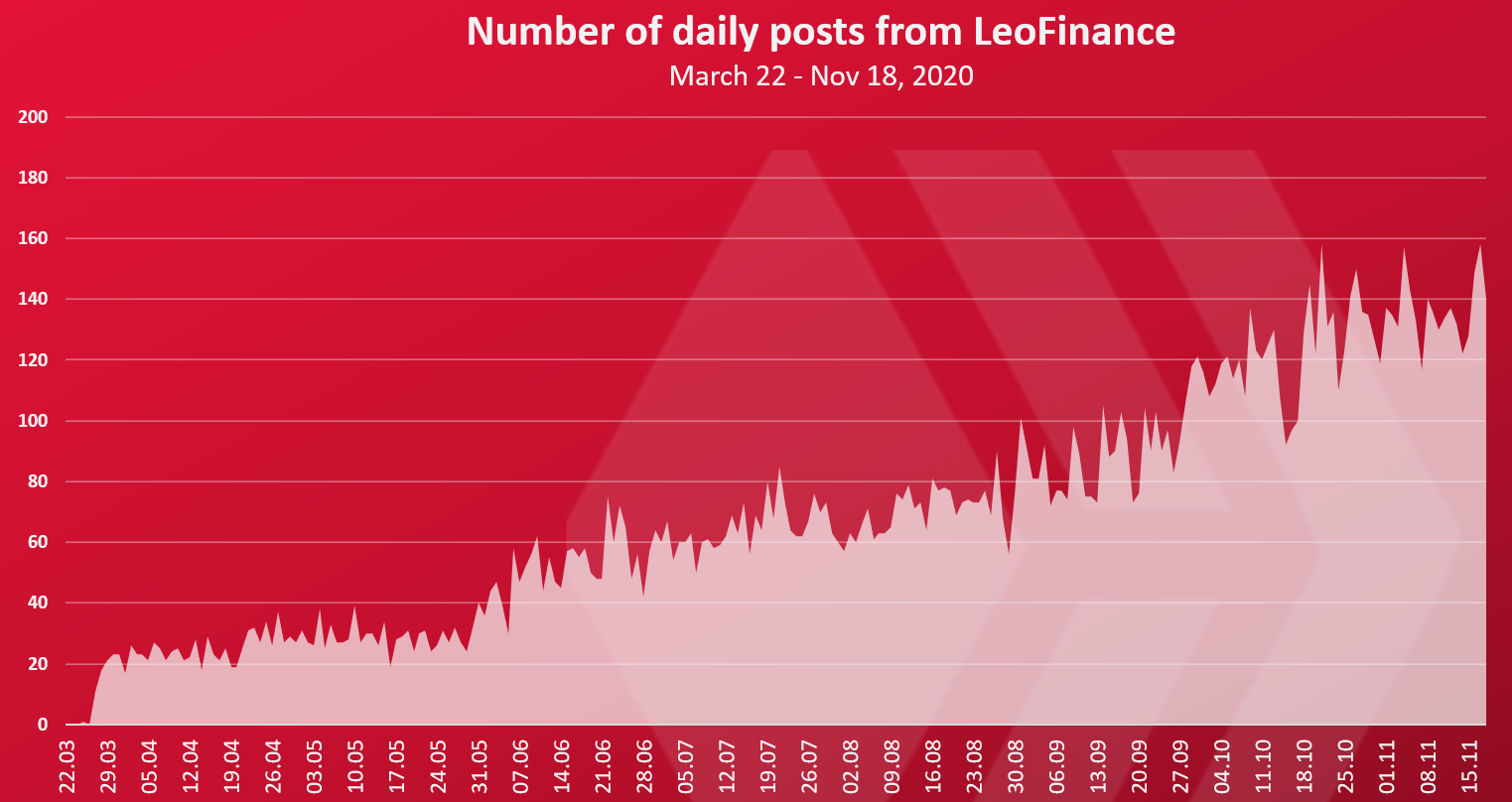 LeoFinance has been growing and this chart show that as well. A very clear uptrend. In the last period there is a 150 posts per day. Compared to the 1000 from Peakd or Hive.Blog, the numbers are smaller but will be interesting will Leo be able to catch up at some point in the future.

Number of daily posts from all Hive frontends

Here is the chart for all the Hive frontends posts per day combined. 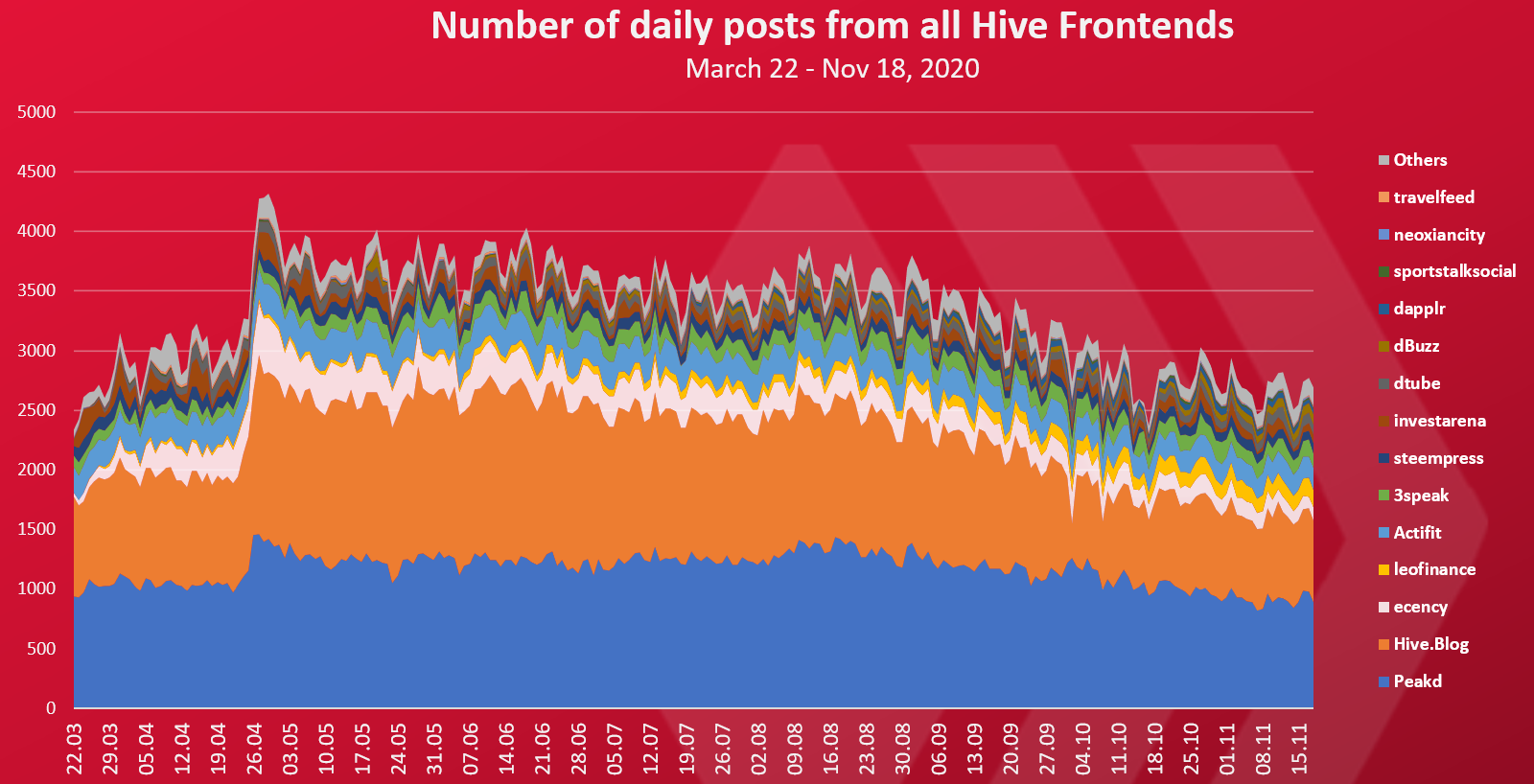 We can see that Peakd and Hive.Blog are dominant in the number of posts.
But the trend seems to be in more diversification of the frontends. Even slightly but it seems that more posts are starting to come from different frontends. Hive.Blog has lost most of its dominance.

Overall, there is a downtrend in the number of posts on the blockchain, but some frontends are showing a constant or increasing numbers of posts like leofinace and the microblogging apps. 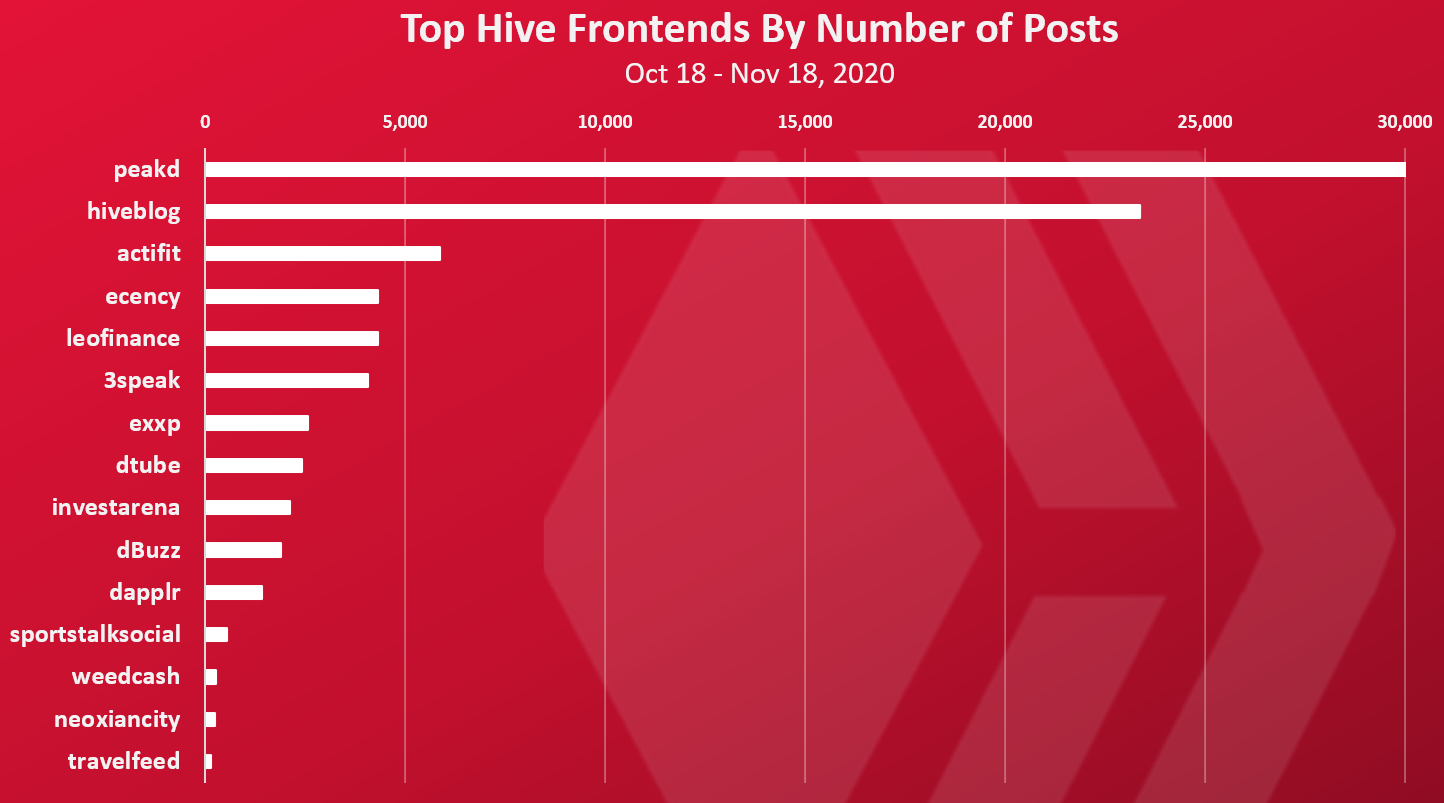 Peakd is the most used Hive frontend now. It has surpassed the Hive.Blog frontend. A 30k to 23k posts in the period. Its not even that close.
This is generally interesting development, as we can see another frontend taking over the Hive.Blog. Back in the Steemit days, the blogging was heavily done from the steemit.com frontend.
This shows that there is more than one dominant web build on the Hive blockchain and it is overall healthy for the ecosystem. It will be great to see more dapps build and attracting their own audience.
We can also notice there is rising projects like LeoFInance that might become competitive with the top ones. 3Speak is also having some big plans.
The microblogging dApps, dBuzz and dapplr are also growing. Some of the tribes like weedcahs and neoxian on the list as well.