My full time Splinterlands rental shop is up and running 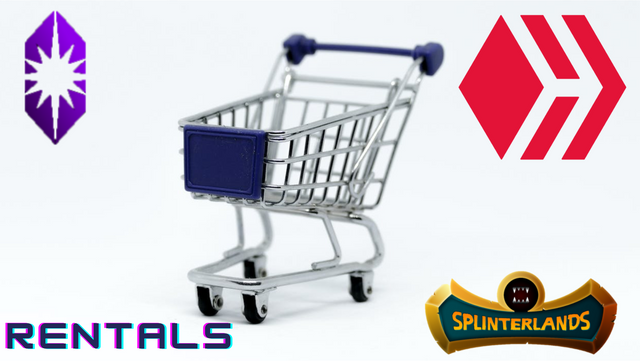 After giving it some thought, I decided to pause my current arrangement and put all my Splinterlands assets into rentals. I haven't really looked at the maths but I reckon I should be pulling upwards of 800 DEC per day from all my monsters.

I started having second thoughts about my current arrangement and the slow pace at which I was accumulating SPlinterlands tokens. For the most part, I was actually glad to be getting in new monsters to my collection at the end of the season but I don't think it is enough.

The way I see it, getting more DEC into my collection, especially in this period when we look likely to be heading to the psychological peg.

My plan is to simply accumulate as many DEC tokens as possible and then push that towards upgrading my deck. If my simple plan works, I'll be able to upgrade specific monsters, rather than the scattergun approach of just opening packs.

Don't get me wrong, opening packs have its benefits but when you're looking for specific monsters, there's hardly any benefit to opening packs.

Speaking of packs, I also need DEC tokens to buy potions that I'll use to open the remaining packs in my collection. At the time of writing, I have 85 CHaos Legion packs and 122 Rift Watcher gems that I don't intend to add more to any time soon.

I previously planned to hold on to the packs in my collection but with sales looking like it will spread into a year, there's really no rush. I could open everything in my collection and simply just buy8cheaper packs for hodling directly from the secondary market.

Alternatively, I could just slowly stack funds over the course of the next couple of months to invest into packs. Anyway, the moral of the story is that I'll get more packs and gems in the future.

At the time of writing, my deck is valued around $1100 according to Peakmonsters. It consists of a total of 300 individual monsters spread across editions and rarities.

If you've used the rental system in Splinterlands then you probably know how much of a hassle the process of putting assets for rent can be. You have to try to pick a decent rental price where you squeeze out decent value from your assets.

Putting one monster for rent is tedious on its own. Now imagine repeating that process 300 times across a variety of monsters.

Excluding breaks in between, the entire process of putting all my monsters for rent took a cumulative time of about 3 hours. I'm not going to lie, it was a very tedious experience and I'm not looking forward to doing it again.

If you have plans to go into full time Splinterlands rental business, keep in mind that this will probably be your biggest challenge as you try to squeeze out value. On top of this, you also have to constantly watch the numbers, while also regularly upgrading the assets in your collection to enable you to squeeze out even more value from your business.

I haven't actually set a "take profit" zone because I'm still far from my reaching the quality of deck I think I could use to compete. In the best-case scenario, I will triple the current value of my deck over the next couple of months and at that point, I'll have to decide between pulling out of rentals for ranked battles or simply just take profit in form of DEC from my assets. Time will tell.

Automate your rentals with splex.gg and use the time saved elsewhere.

I use it too, it works great

You could pay peakmonster for premium then use their optional settings for applying price ranges to all your rentals in bulk.

Just use splex man. It rents for you, and it is easy to set up. If you need help, let me know.

If my simple plan works, I'll be able to upgrade specific monsters, rather than the scattergun approach of just opening packs.

I prefer this method too as I want to build my deck specifically for battling. We will be getting exactly what we want and for the price we are willing to pay. Packs are more like gambling and is advisable to consider after we've built our preferred deck. At least for me. 😊

If you've used the rental system in Splinterlands then you probably know how much of a hassle the process of putting assets for rent can be. You have to try to pick a decent rental price where you squeeze out decent value from your assets.

Experienced this too. I am a little lazy so I just placed a price and check them after the end of each season. 😁
Though, I keep on reading 3rd party sites where we can automate or make it easier to manage our rental assets.

I have 2 accounts, one which I play and one which I use as a rental account. I put any spare cards from my main account into the rental one and use splex.gg to automate the renting process. They take a 10% cut but they are constantly adjusting the rental prices to get you the best deal. Well worth taking a look at. I also have one of their archmage tokens which I picked up fairly cheaply on hive-engine and I occasionally use that to play the matches on my main account when I'm busy/away. They are also great and the win ratio is much better than other bots I've used so was definitely worth the investment from hive-engine

As many already suggested in the comments: use splex.gg! The 10% fee you pay is totally worth it as the rental bot will optimize your listings evry now and then without you having to do anything!
!PGM