Is Hive just a blogging platform? 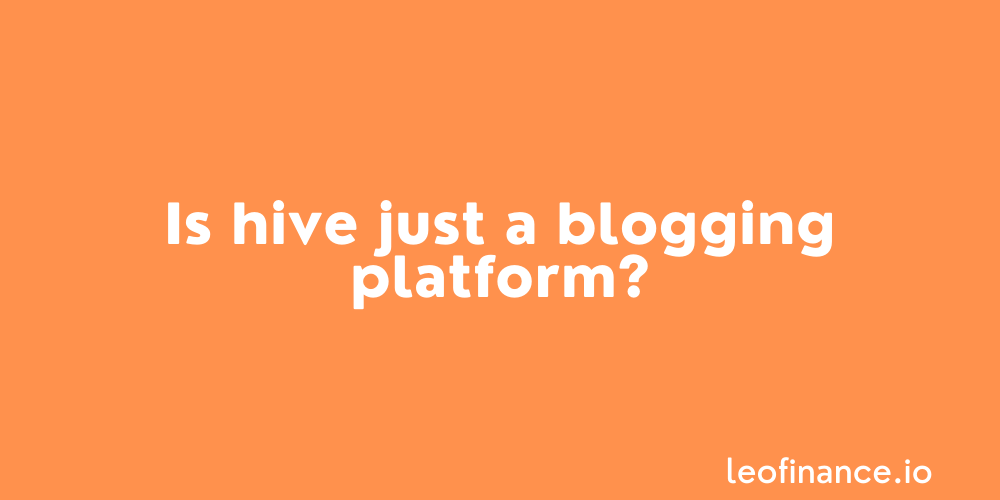 Hive is so much more than just a blogging platform.

While on the surface people just see Hive as a network for decentralised blogging apps, potentially it's a completely different use case which could end up sending the coin 20x.

As I’m sure the 90% of those reading this blog as lurkers rather than active members of the LeoFinance community know very well, blogging is EXTREMELY niche.

Not everyone needs a blog...

But everyone needs some sort of account/savings/wallet for their money.

This is where Hive truly shines.

Web3 Hive accounts are so much more than blogs.

They provide you with not only the ability to connect to multiple front-ends to get your message across, but they allow you to transact and save without permission.

They’re your digital savings account and wallet all rolled into one.

Consider someone who is unable to access the traditional banking system for whatever reason.

Maybe they’re paid for their labour in crypto and manage their entire personal finance situation via a smartphone.

Previously they would still need permission to use a third part app such as PayPal or the like to store their funds.

But Hive is a game changer.

By instantly converting and holding their wage in the HBD stablecoin, they're able to earn 20% APR on what are essentially US dollars.

Using the various bridges via LEO to other chains, they then have the entire crypto world open to them.

Free to use and spend their crypto on day to day items (using whichever external spending app they choose) as needed, all without asking permission.

Made possible by the decentralised, secure Hive blockchain that allows the entire Web3 ecosystem to function and connect to the outside world.

The decentralised nature of the Hive blockchain ensures their Web3 Hive account remains secure and in the control of only whoever holds the keys.

As long as you can source access to apps that allow you to spend your crypto wages, you are potentially 20x better off than someone using a traditional USD bank account to save their wages.

When you frame an answer to the question of is Hive just a blogging platform in that way, things start to get real.

Do not sleep on the life changing ability of Hive and Hive Backed Dollars.

It is so much bigger than the couple of blogging platforms that use the blockchain as a base layer for their dApps.

In the same way that it’s so much more than just the rich compounding their crypto.

While the answer is obviously that Hive is so much more than just a blogging platform, they certainly do play a major role in the ecosystem.

Blogging rewards paid out in HIVE are awesome because they ensure the token distribution is always spreading far and wide.

Token distribution is a key aspect to keeping Hive's governance decentralised and the reward pool system to distribute inflation works like a charm.

But again, the Hive rewards pool doesn't have to be tied to a blogging platform.

when you start to consider further use cases for the rewards pool outside of humble blogging dApps, things start to get super interesting.

Mark my words, there are some extremely interesting ways to implement the rewards pool system which we're seeing already seeing in Hive based games such as dCity.

Hive is so much more than just a blogging platform.

Come for the blogging and stay for the permissionless Web3 crypto account.

Your future self will thank you.

Believe it or not it started a place to jet juicey backlinks to my web properties for SEO. Back in 2017 I didn't even know steam was a crypto. Lots of reasons to come, more reasons to stay!!

You know what, using Hive to improve an external website is something we hardly see.

I know our domains aren't as strong as say Medium which a lot of businesses use in this way, but it's an opportunity that I'm surprised more don't explore.

All in good time I guess.

How did you end up using Steem for your own business?

Was it just duplicating your content directly, or did you have another posting strategy?

I haven't checked it in a long time but steem was a MONSTER. It was like a PR 8 with high domain authority if I remember correctly. And, if you're post reached a certain $$ amount the nofollow tag was automatically removed so you had a direct high pr backlink to whatever site you were linking to.

I didn't do duplicate content because the value of the content on steem was more valuable than the content on my sites lol. I just wrote original posts and linked back to my site. You really only needed 1 or 2 links from steem. After that they were just noise but It usually got my pages onto page 1 of google because Nobody was using steem in that way.

I imagine those days are over

My ideal long term scenario is that Justin Sun gives up on Steem and the Hive DHF buys the Steemit domain back for Hive haha.

not sure why it was so powerful but it was. My hive stuff gets indexed and linked back but has little power compared to steemit. But for all other purposes steem sucks lol

The Hive blockchain is definitely something that dApp developers should explore in more detail.

I mean just look at how much better playing Splinterlands is than other EVM based games.

So much potential on Hive.

It took me 4 years to know so many things about this blockchain and I am not even 20% able to capitalize on it. Hive is a whole world.

Honestly, my advice would be to just pick a few key Hive-based projects that you're passionate about and focus your attention (and investment!) on those.

You want to achieve life changing money if one of them hits.

Not just say you were right, but not invested deep enough to really cash in.

Well owning an account like you mentioned doesn't necessarily need one to be just a blogger, with the limitless opportunity one gets on Hive. I'd say, a person that gets a free account can do so much more.

Blogging is just a single type of dApp built on top of the blockchain.

There is sooooooo much more to Hive than just blogging.

I think Hive is always more than a blogging platform to me because I came here for a game called Splinterlands. It was only afterward that I learned about blogging and I expect more of this to happen in the future as more apps are built on Hive.

I actually didn't know that it was Splinterlands that first brought you to Hive.

You're such an integral part of the community now!

I came for the blogging, now I own crypto assets. I didn't know what I was getting into, but I'm glad I did. It's definitely more than blogging.

I know that from working with your husband that it isn't easy to transfer fiat into Nigeria...

But a Hive account acting as a bank account that neither of us need permission to use, works seamlessly.

So much more than a blogging platform...

I believe social media is an important piece in the development of defi and web3 and hive did right by starting this way. My entry point into crypto was via blogging and it still plays an important part in my journey since this is what I actually love doing. However, through it, I have learnt a lot about the crypto space.

There is a lot one can do on hive. I love this option and I do not think many blockchains offer this many options.

I'm similar to you in that I love blogging and don't want to stop.

But it certainly is an objection that I face when trying to onboard friends who don't consider themselves writers as such.

Just gotta show them that there's so much more on offer here.

To me, Hive is almost like an incubator where you can build and launch your own platform. That's why we see so many cool projects spawning from it all the time!

An incubator is a cool way of thinking about Hive.

This is an interesting discussion. I agree that Hive is not only a blogging platform. Having a Hive account opens doors to many opportunities.

On the Hive official website, we see this description. 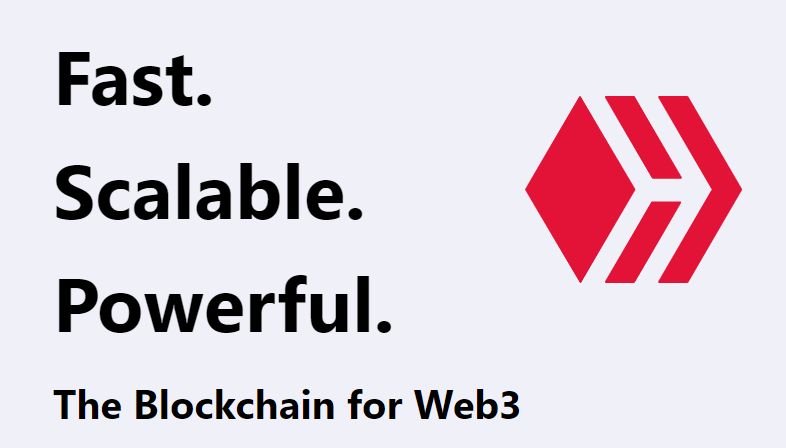 We need one sentence to be remembered when people talk about Hive. Ethereum is the first smart contract blockchain. Terra is the blockchain for stable coins. Solana is one of the fastest blockchains. Hive is empowering people by...

I need to write an article about this topic :)

Hive - The blockchain for Web3

I just wanted to make this a heading for more impact.

Also, I'm looking forward to reading your take on the topic too :)

Keep up the great blogging mate, I've been loving your work lately.

I can't wait for project blank. That will push Hive's value higher even more.

Will be cool if it all works as it could.

Great post. I always have problems explaining the Hive to people. This post will definitely help me. Thanks

Hive really is the blockchain for Web3.

There is so much potential here that its ridiculous.

Nice job @forexbrokr of explaining #Leo and #Hive for newbies to understand.

Hopefully the discussions that its sparking the comments will help others be able to explain things to their friends too :)

Usually, when I explain it to people who are not familiar with crypto, they have a hard time understanding where the money/crypto comes from so they think it's a scam lol.
For those into crypto, they're just more interested in bigger blockchains like eth, sol etc...they gonna regret it big time when hive will moon!

Since I started playing with ListNerds, my engagement has massively increased.

Usually, when I explain it to people who are not familiar with crypto, they have a hard time understanding where the money/crypto comes from so they think it's a scam lol.

Haha I can empathise here.

And correctly answering "the code just prints it" certainly doesn't put their mind at ease.

We just need to get to the point where they don't care.

I mean nobody asks where the money they're withdrawing from the ATM first came from, right?

It just comes out of the hole in the wall and everybody is happy.