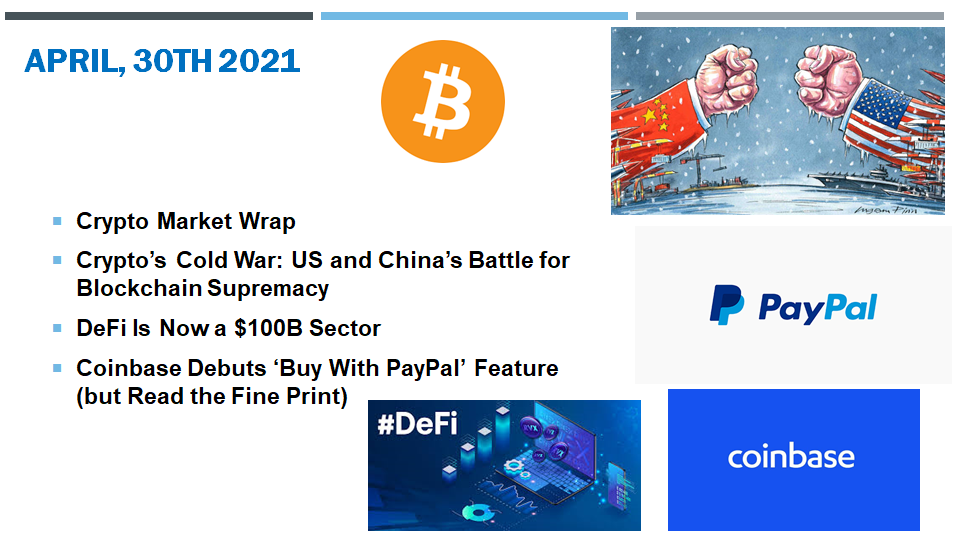 Traders and analysts continue to talk up ether and alternative cryptocurrencies as bitcoin struggles to regain the $64,000 record price level attained weeks ago.

The market dominance of bitcoin continues to decline, and it’s less than half of the total blockchain market Thursday. At 49.5% at press time it is down from 73% at the start of 2021.

“Crypto natives might be taking profits in BTC to free up some capital to invest in alts,” Rosenblum said.

The technical proposal EIP 1559 to fix the Ethereum blockchain’s problematic capacity constraints may be aiding in the bullish sentiment.

One of the biggest gainers in the altcoin space this year is Binance coin (BNB), an asset used to offset trading fees charged on the Binance exchange. On a percentage basis, BNB’s dominance, the share it takes up of total crypto market capitalization, has gained over 550% since the start of 2021. As of press time, BNB’s market dominance is at 4.4%.

🗞 Crypto’s Cold War: US and China’s Battle for Blockchain Supremacy

America’s relationship with China could be best described as “frosty”. The first and second-largest economies in the world have increasingly found themselves at loggerheads; from trade to finance, artificial intelligence to telecoms.

China and the US have also clashed diplomatically over China’s handling of its neighbors, in particular, Taiwan.

In technology, there is a significant rivalry between the two countries when it comes to 5G. The rollout of Huawei’s 5G network - which some claimed was a ploy by the Chinese state to spy on its rivals - in Europe was met with pressure from US regulators who lobbied to keep Chinese companies out of American allies’ digital infrastructure.

In 2020, China controlled nearly 80% of the global processing power that runs the Bitcoin network - meaning the majority of the world’s Bitcoin transactions are routed through machines in the country.

The reason? Cheap electricity and access to the latest and greatest in mining hardware.

This has kickstarted a movement in the US to help claw back some of Chinese miners' dominance. Core Scientific, a US company building Bitcoin mining operations in the US has raised hundreds of millions of dollars to establish mines in disused factories across America. Others have joined them.

As the Coinbase public listing approached, many analysts were looking for a $100 billion valuation. The cryptocurrency exchange, founded by Brian Armstrong and Fred Ehrsam, hit that mark briefly after listing, but COIN has settled down to a less-rarified valuation.

Meanwhile, CoinGecko calculates a total market capitalization of $128 billion for decentralized finance (DeFi), the corner of the cryptocurrency industry that represents a wide range of lending, trading and betting activities carried out almost entirely on blockchain networks using tokens as proceeds and collateral.

Those aforementioned deposited assets are referred to as total value locked (TVL). TVL on Ethereum, using the most widely cited data site, DeFi Pulse, is $66 billion as of this writing, more than quadrupling since Jan. 1 when it was $15 billion.

Here’s a chart that compares funds entrusted to Ethereum’s many DeFi smart contracts in the last year or so to funds that went to founders in initial coin offerings during the 2017-2018 boom (an updated version of one published here): 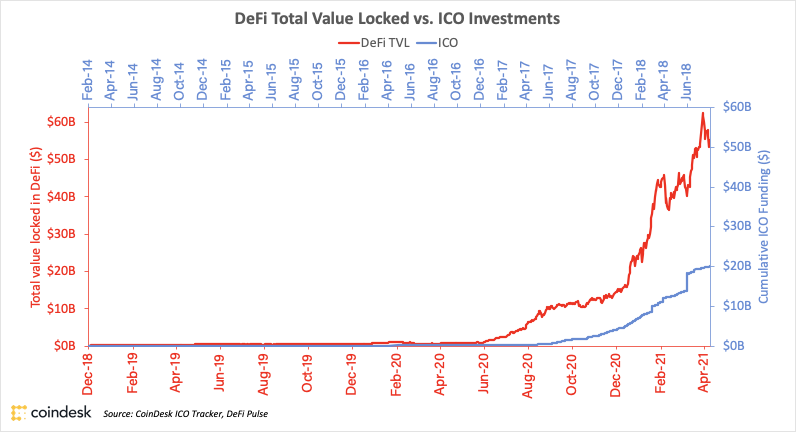 It should be noted that DeFi Pulse was in the midst of updating how it tracks the TVL for the robo-adviser for yield, Yearn Finance, when this was made, and so those numbers aren’t in this graph. According to Yearn itself, though, it has had several billion dollars tied up. 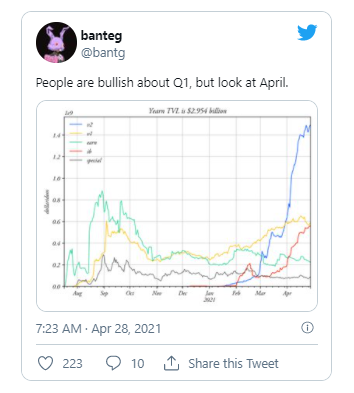 Coinbase is allowing U.S. users to buy cryptocurrency with their PayPal accounts in a major expansion of the exchange’s funding rails.

It is also another sign of crypto’s increasing mainstream acceptance. PayPal, long coy and standoffish about the sector, began allowing users to buy crypto on its own platform last year and has gradually expanded this service. Coinbase, one of the crypto industry’s oldest startups, recently listed its shares on the Nasdaq.

Coinbase users can now buy up to $25,000 in crypto daily using PayPal, according to the exchange’s settings page. They’ll lose nearly 4% of such purchases to PayPal-specific fees.

An ecosystem partnership between Hotbit <> Seedify.fund as well as exchange listing.

"With almost 2 years of development, @sycoin and @BlockFoundry are proud to present the launch of Syscoin LUX!"